Urban is pleased to announce that Cape May County’s Woodbine Roundabout Project was recognized by ACEC New Jersey with an Honor Award and as a Grand Honor Award finalist in the small projects category at the organization’s annual Engineering Excellence Awards gala.

“We are excited to congratulate Cape May County and other key partners on the successful completion of this project and on this award from ACEC/NJ,” said Gary Etter, PE, an Urban vice president and New Jersey regional manager. “The FHWA is a strong endorser of roundabouts and supports the fact that they lead to improved operational performance while promoting lower speeds. Residents of Woodbine and Cape May County are already experiencing the benefit from this safer intersection.” 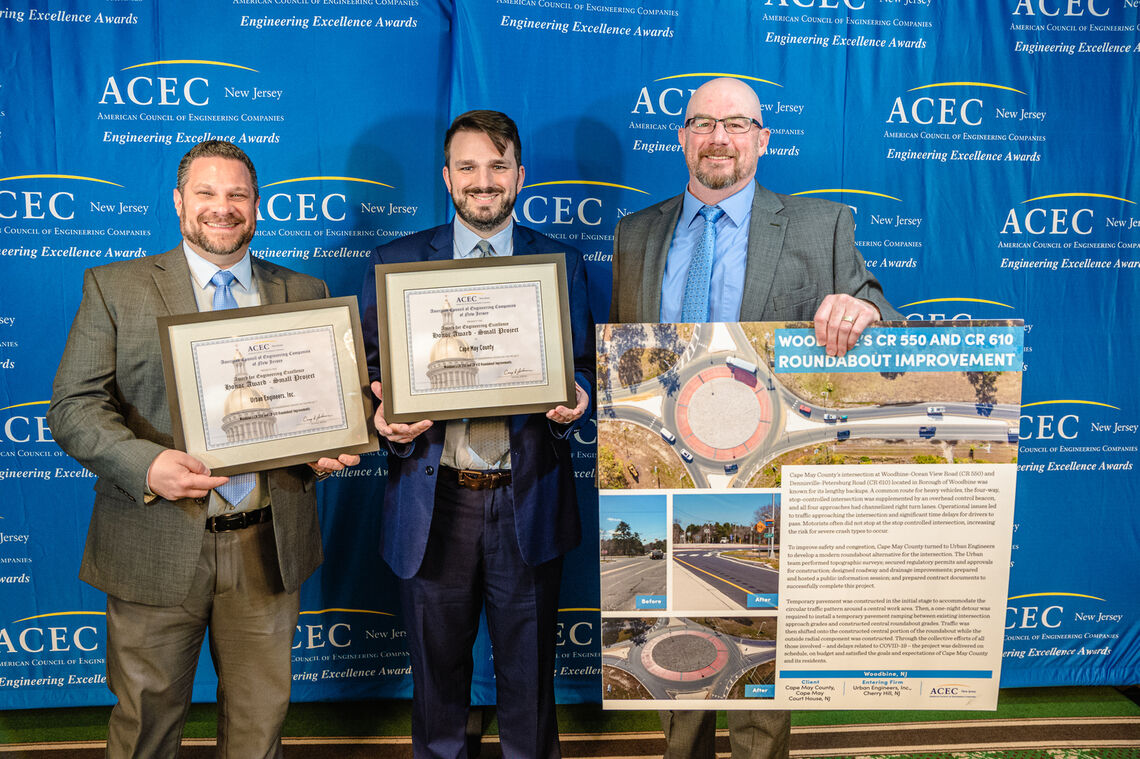 Cape May County’s intersection at Woodbine-Ocean View Road (CR 550) and Dennisville-Petersburg Road (CR 610) located in Borough of Woodbine was known for its lengthy backups. A common route for heavy vehicles, the four-way, stop-controlled intersection was supplemented by an overhead control beacon, and all four approaches had channelized right-turn lanes. Operational issues led to traffic approaching the intersection and significant time delays for drivers to pass. To improve safety and congestion, Cape May County turned to Urban Engineers to develop a modern roundabout alternative for the intersection. The Urban team performed topographic surveys; secured regulatory permits and approvals for construction; designed roadway and drainage improvements; prepared and hosted a public information session, and prepared contract documents to successfully complete this project.

Temporary pavement was constructed in the initial stage to accommodate the circular traffic pattern around a central work area. Then, a one-night detour was required to install a temporary pavement ramping between existing intersection approach grades and constructed central roundabout grades. Traffic was then shifted onto the constructed central portion of the roundabout while the outside radial component was constructed. Splitter islands were constructed in the final stage after traffic shifting patterns approaching the work zone were no longer needed. Through the collective efforts of all those involved – and challenges related to COVID-19 – the project was delivered on schedule, on budget and satisfied the goals and expectations of Cape May County and its residents.