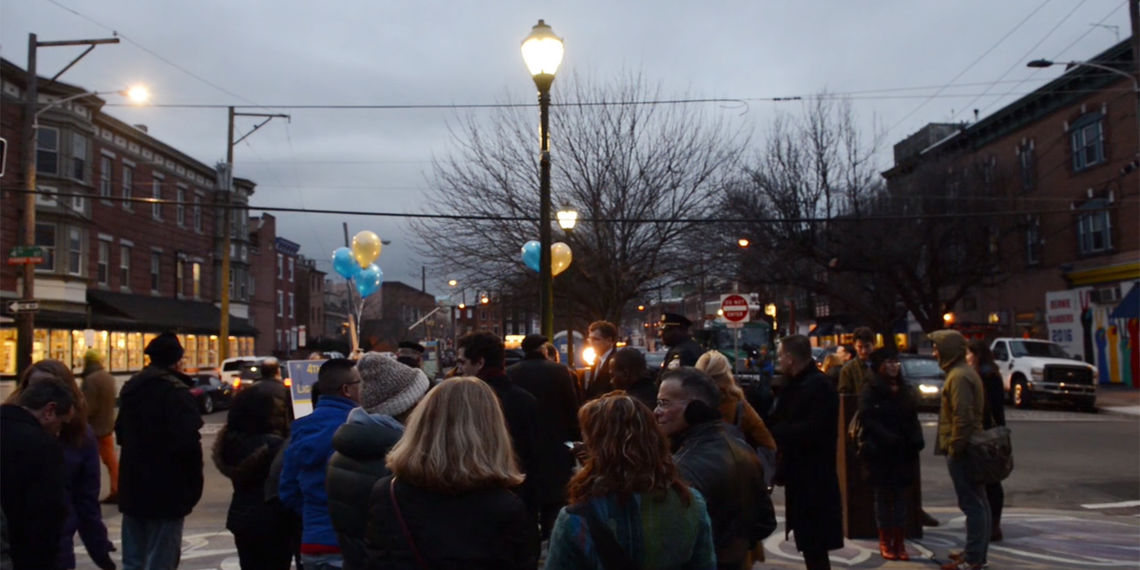 50 newly installed pedestrian lights illuminate the streetscape improvement project along 4th and South Streets in the Queens Village neighborhood of Philadelphia. It is a proud moment for the South Street Headhouse District (SSHD), which understood the project’s importance to one of its prominent commercial corridors, the Historic Fabric Row. Fabric Row is home to numerous textile shops which have thrived on 4th Street for over a century.

Even as the Street has welcomed new storefronts, the shop owners recognized the necessity for a much needed upgrade. “When I opened my boutique 9 years ago, the first thing I heard from merchants that had been on the street for many years is, ‘we need lights on this street’,” said Elena Brennan, SSHD Board Chair. Ms. Brennan is also an owner of the Bus Stop Boutique, a shoe shop on 4th Street, which specializes in fine shoes. She is very happy about the improvements, which will encourage more shoppers to visit her store.

“Lighting is a key to safety,” said Councilman Mark Squilla of the 1st District. “When people feel safe, they’re more willing to go out.” With over 400 businesses affected by the streetscape improvements, more people on the street is exactly what shop owners want to hear. In addition to the new lighting on 4th Street, 130 existing pedestrian lights are being upgraded to new LED lighting on South Street. Another popular commercial corridor in Philadelphia, South Street will benefit from the upgrades by welcoming patrons to its storefronts.

Also included with the streetscape improvement project are over 20 newly planted trees, fixed curbs and sidewalks, and new decorative crosswalks. These elements will be enjoyed by pedestrians both day and night. Urban Engineers led the design of this streetscape lighting improvements project for the SSHD. They also provided construction services which included estimating, scheduling and construction inspection.