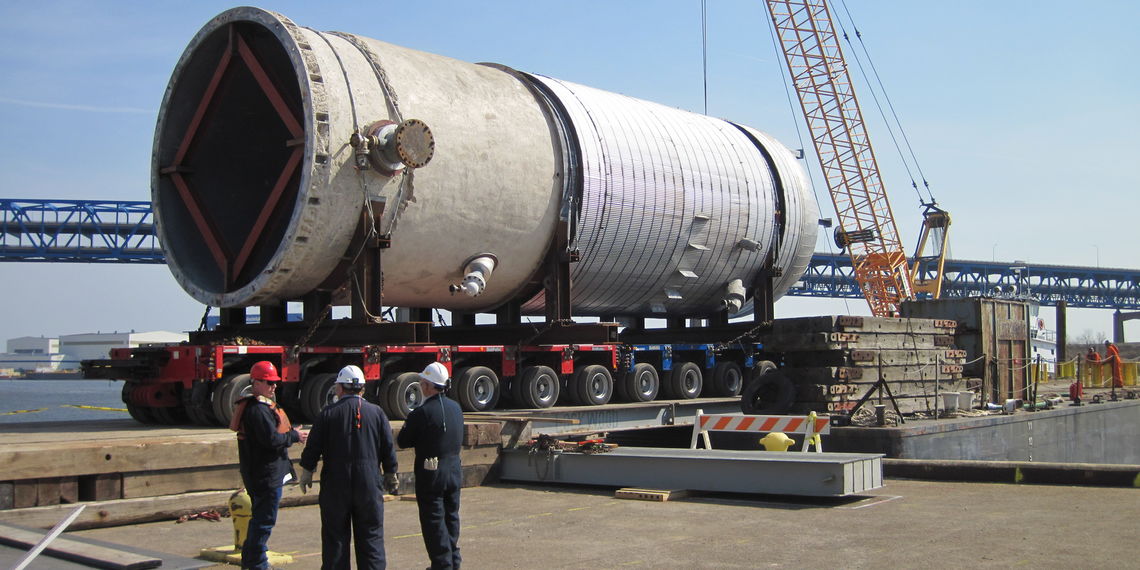 PES chose Urban to find a landing spot at their refinery on the banks of Schuylkill River for their 280 ton reactor transported from Texas.

Moving a 280 ton reactor from Texas to Pennsylvania required special trucks, multiple tug boats, the Texas Rangers and, finally, the help of Urban Engineers.  With valuable assets at risk and an aggressive schedule, Philadelphia Energy Solutions (PES) chose Urban to find a landing spot at their refinery on the banks of Schuylkill River. 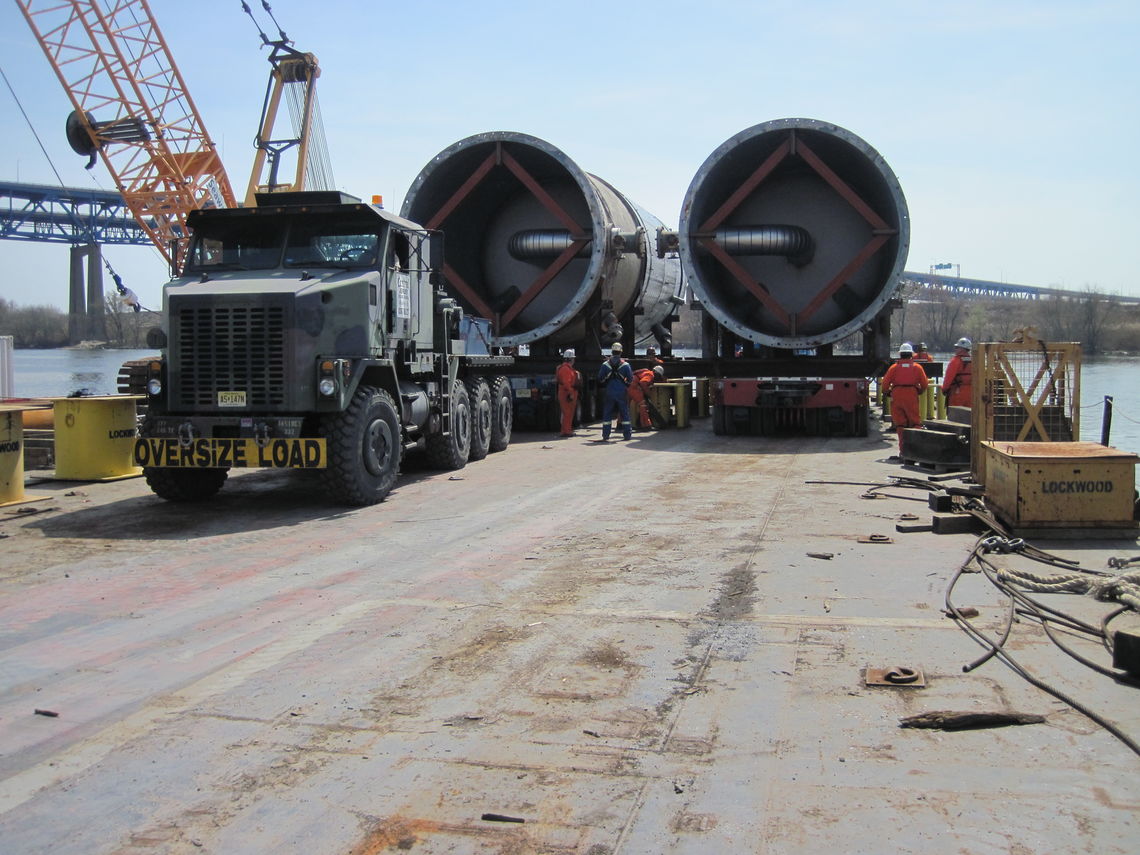 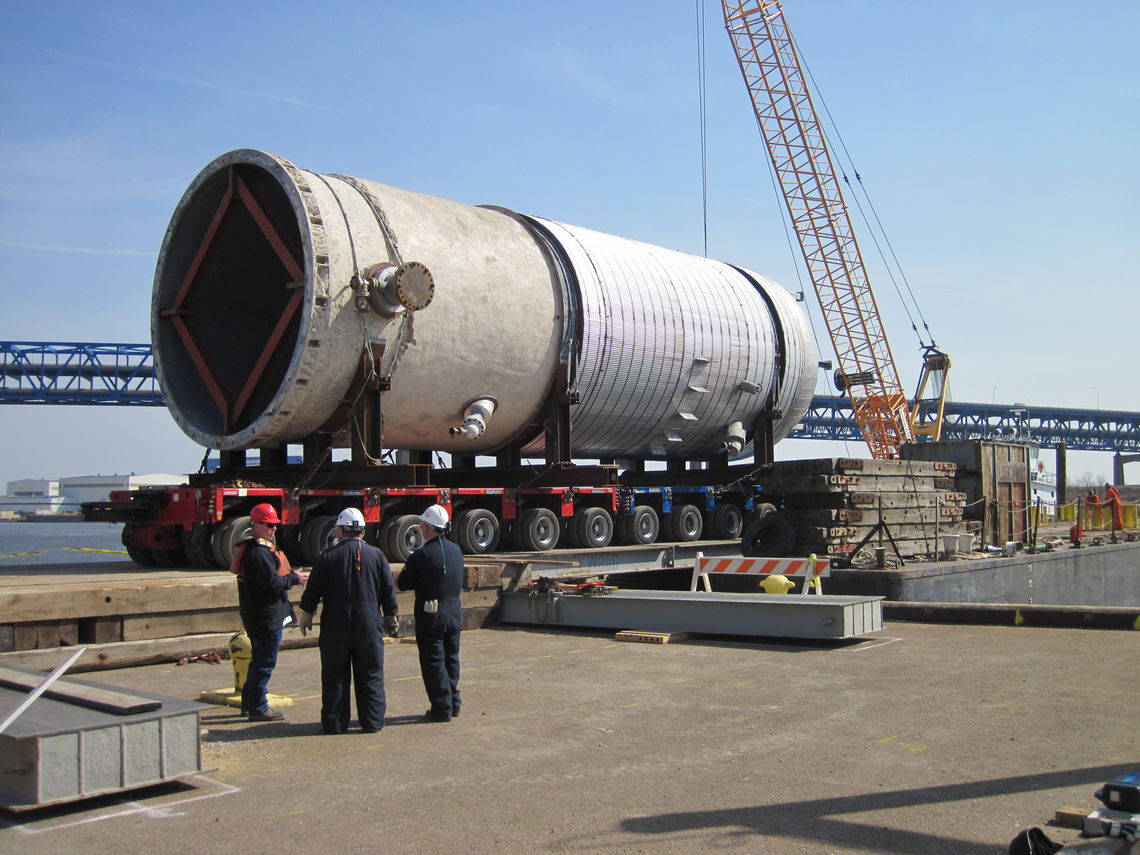 The reactor is seated on the Goldhofer Trailer

After a team of Texas riggers mounted the reactor onto a Goldhofer modular trailer system, equipped with hydraulic steering and adjustable suspension on each of its 24 axles, the reactor would be driven to the Gulf coast and onto a barge, sailed around the Gulf into the Atlantic, and up the Delaware River toward Philadelphia. Every turn of the journey had to be mapped and checked. Having surveyed every obstacle and overpass on the route in Texas, and arranged for a nighttime highway closure, the final step remained in question: offloading the reactor unit onto a suitable dock on the Schuylkill River.

Combing through site plans of the Schuylkill River, Urban and PES selected Wharf 3, an inactive reinforced concrete pier built in 1947.  Urban used divers to inspect the planned unloading location of Wharf 3 to determine the current condition of the structure, making note of any areas that would not safely support the load.

While reviewing the original construction plans for the pier, Urban’s marine structural engineers realized that the reinforced concrete pier deck would not be able to support the concentrated wheel loads of the Goldhofer trailer.  Instead, the load would need to be distributed directly to the pile bents.  Complicating matters further, the original pier plans indicated that distributing the load between only two pile bents was likely to exceed the original design capacity of the piles.  The load would need to be spread to three adjacent pile bents. 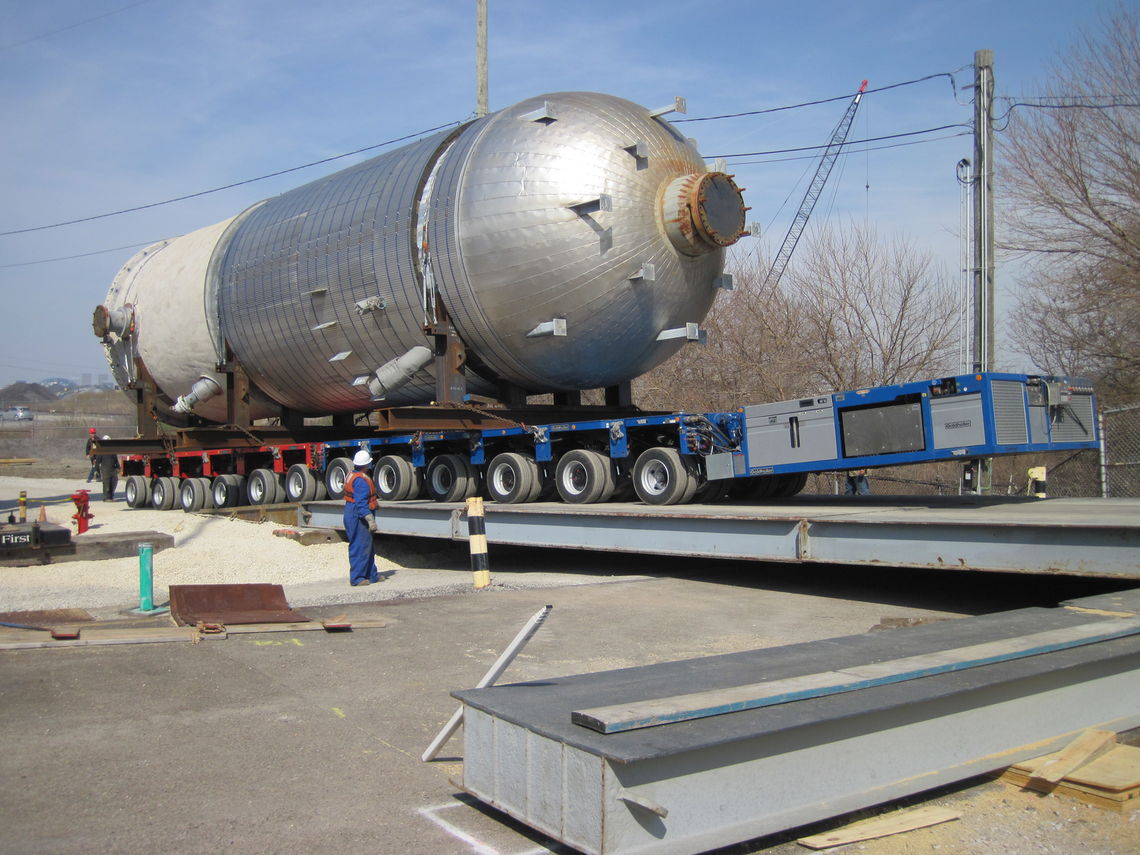 The first reactor leaves the dock for dry land 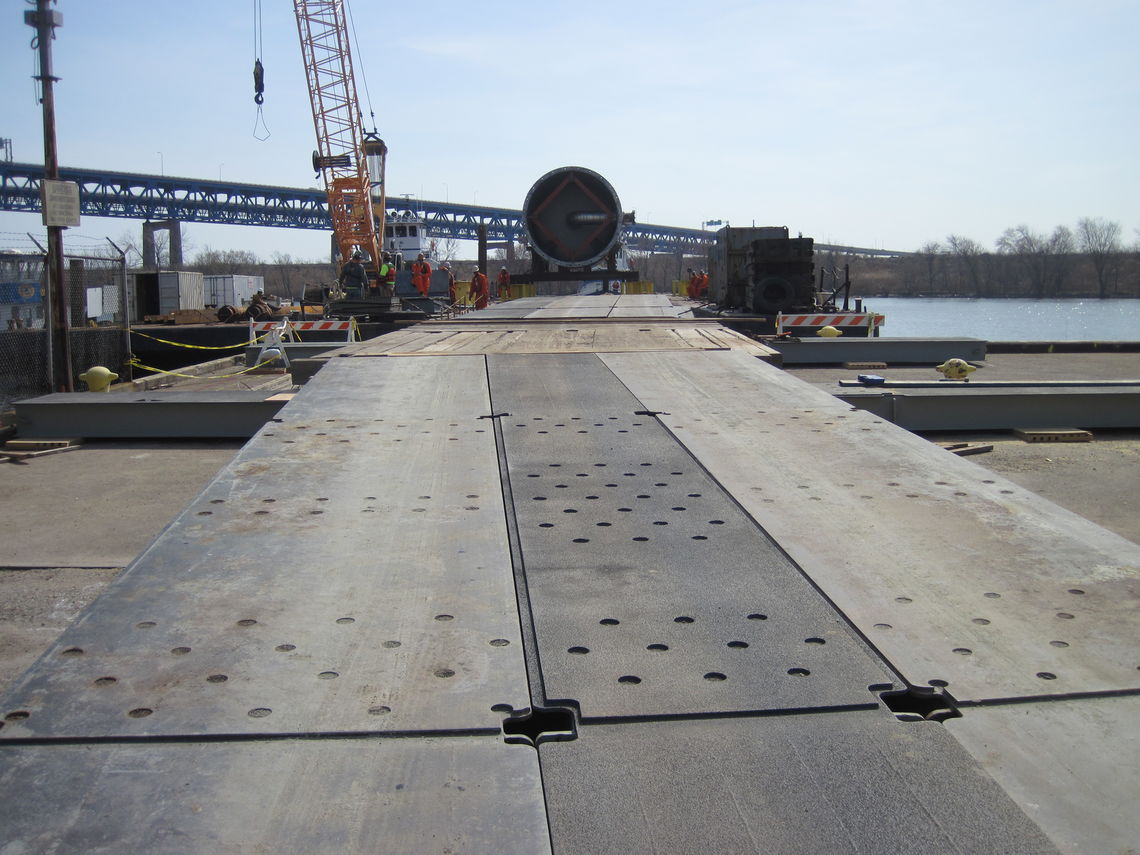 The last reactor, surveying the final leg of its journey

Even when spreading the load between three bents, typical configurations would tend to concentrate the load on the middle of the three bents, overloading it and exceeding the original design capacity of its piles.  So, Urban carefully analyzed the entire offloading operation and worked with the rigging contractor’s available spreader beams to design a sophisticated deflection-based blocking system to safely distribute the load to the existing piles.  In this system the vulnerable middle bent would only be engaged after the outer two bents took up their fair share of the load.

Urban’s inspectors were on hand when the barge arrived to double check the blocking and rigging. In the end, after a journey that lasted days and finished at high tide on the Schuylkill River, the reactor drove over Wharf 3 with barely a pause to change directions. 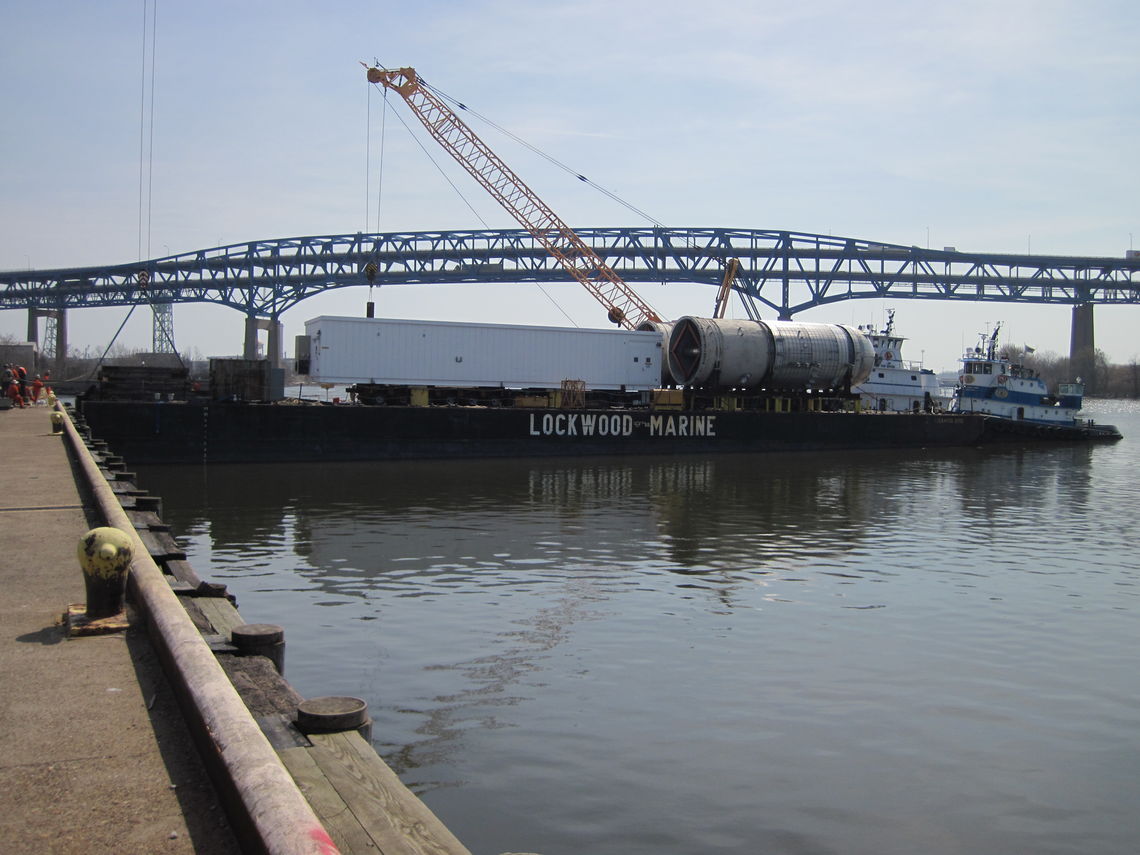