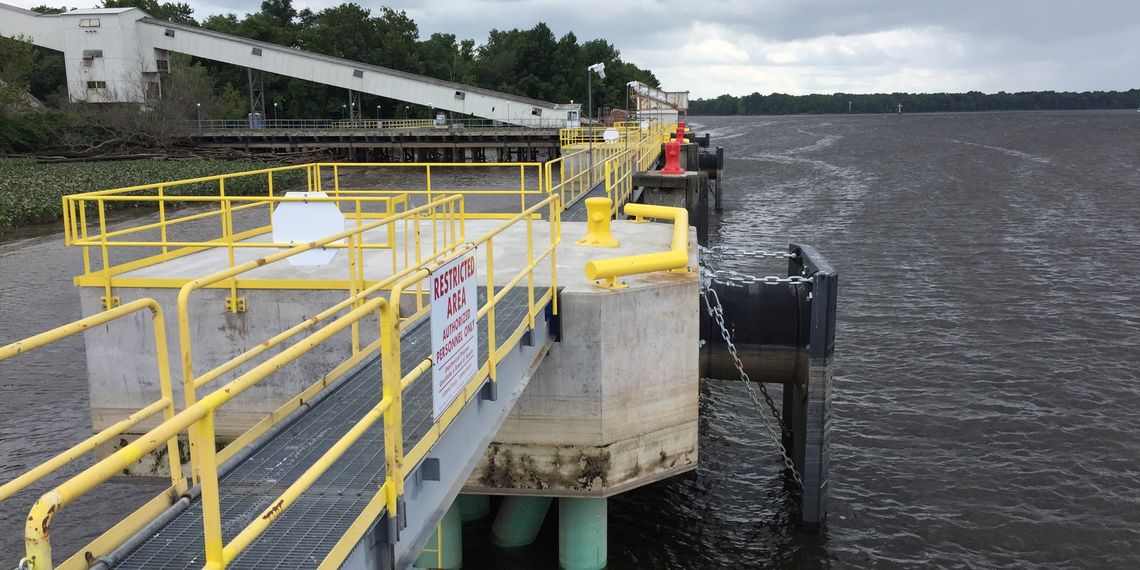 A view of the new dolphins forming a the breasting line.
New Dolphins at NGC's Burlington Marine Terminal

Urban has been providing the National Gypsum Company (NGC) with marine engineering solutions since 2015 at the Burlington, New Jersey marine terminal.

In 2015, Urban conducted a structural condition inspection of the NGC marine terminal along the Delaware River. After reviewing existing plans, Urban performed a hands-on, above and below water inspection of the pier structure, taking ultrasonic metal thickness measurements of the steel piles under the breasting and mooring dolphins.

Urban’s professional engineer led an OSHA-compliant diving crew, viewing the diver’s helmet camera feed and talking the diver through the critical inspection steps via radio. The steel piles under the dolphins had previously been jacketed in the corrosion zone in an effort to slow corrosion. During the inspection, Urban found that the piles had lost more than 50% of their thickness below the jackets. After the inspection, Urban prepared a full condition inspection report to document the findings, and outlining potential next steps to address the situation: not only were the dolphins somewhat compromised by the loss of steel, but the dock, which had been built in the 1950s, was now servicing vessels twice as large as those it was originally designed to handle.

While discussing the report findings with NGC, Urban recommended forgoing structural analysis of the existing dolphins. The dolphin piles had lost half their section and had not been designed for the dead weight tonnage of modern vessels, and any analysis would likely conclude that the dolphins were inadequate. With this in mind, NGC elected to skip the analysis and devote its resources immediately to the design of replacement dolphins.

Urban designed three new breasting dolphins to completely replace the existing, deteriorated breasting dolphins at the terminal. The new structures were designed to resist the berthing, breasting and mooring loads of the new Trillium Class self-unloading bulk carriers calling at NGC’s dock, and included engineered fenders to modernize the berthing system and provide greater safety and protection to both structures and vessels. The existing breasting line was pushed slightly outshore to take advantage of greater natural water depths, and to allow for the new breasting dolphins to be constructed inshore of the existing breasting line, causing no interruption to terminal operations during construction.

Having recently completed the design and permitting process for three new breasting dolphins at NGC’s Burlington location, Urban managed the bid process for NGC answering RFIs and helping to rank and evaluate bids. Once NGC selected a contractor, Urban stepped in to provide construction inspection and technical support services on an as-needed basis. This approach minimized inspection costs by focusing on only the most critical aspects of construction: pile installation, welding, and concrete placement.  Urban also reviewed all submittals and RFIs on the project, and assisted NGC with obtaining a permit extension to allow specific in-water work to continue through the seasonal permit restrictions. When dynamic pile testing showed that the piles could attain greater uplift capacities in the weathered rock strata than initially thought, Urban redesigned the pile anchorage into the concrete dolphin cap to take advantage of the added capacity, ensuring that the pile-to-cap connection would not be the weak link in the load path should larger vessels eventually call at the dock. 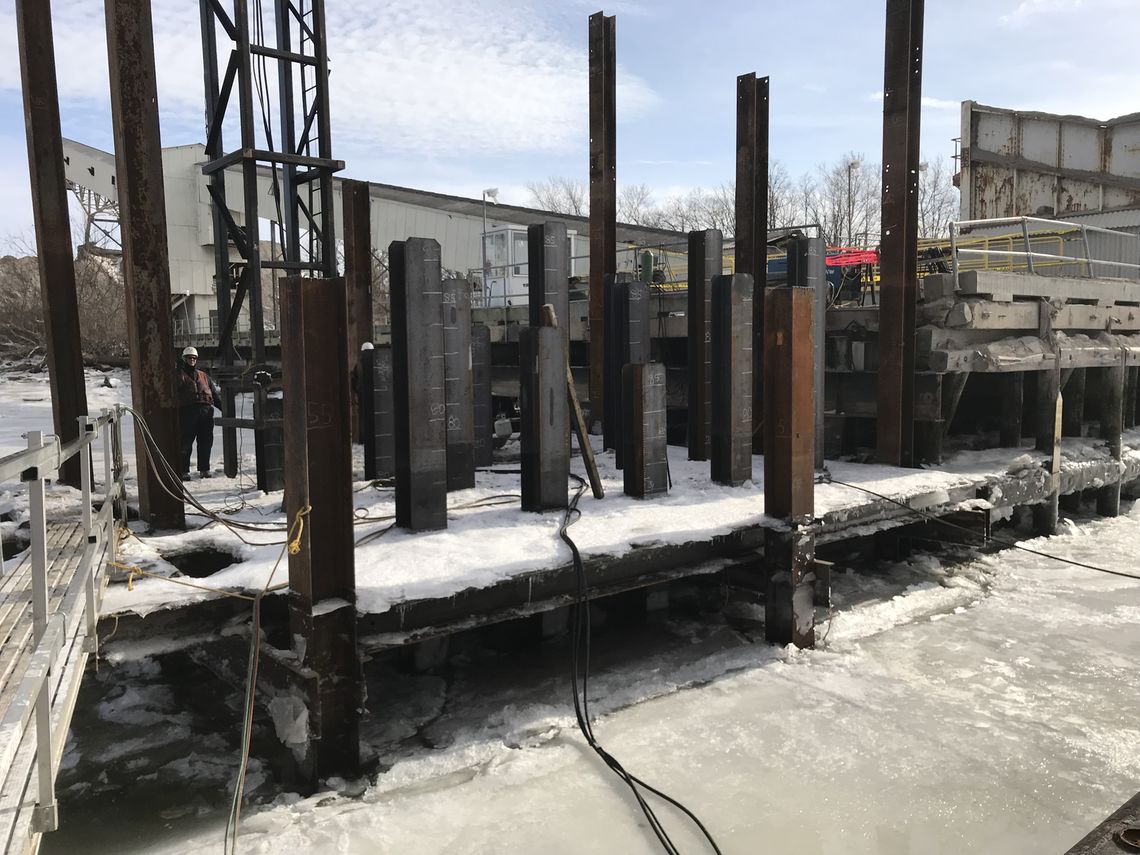 A view of the iced over Delaware River from the floating crane barge. Though it may pose its difficulties to dockbuilders and inspectors, winter is ideal pile-driving season, as there many animals are hibernating and there are no environmental restrictions. 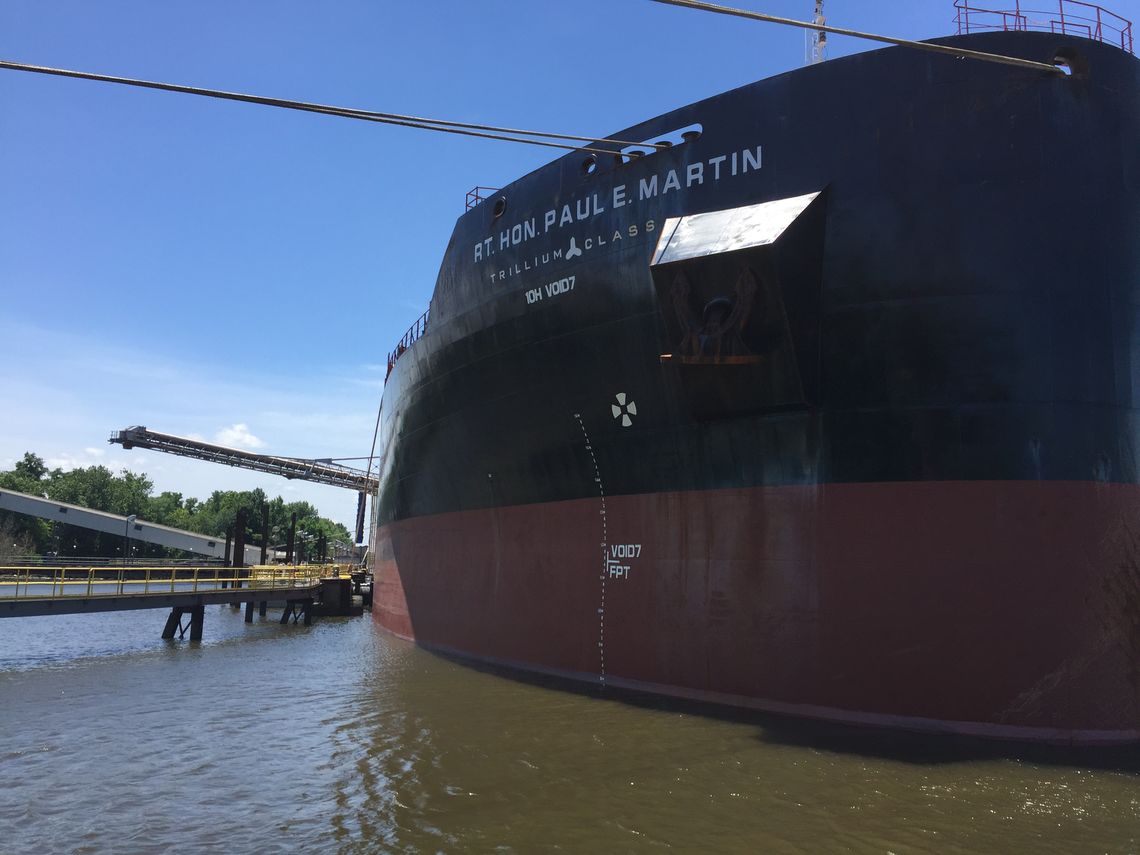 The Right Honorable Paul E. Martin, safely berthed against the new breasting dolphins with all mooring lines made fast. 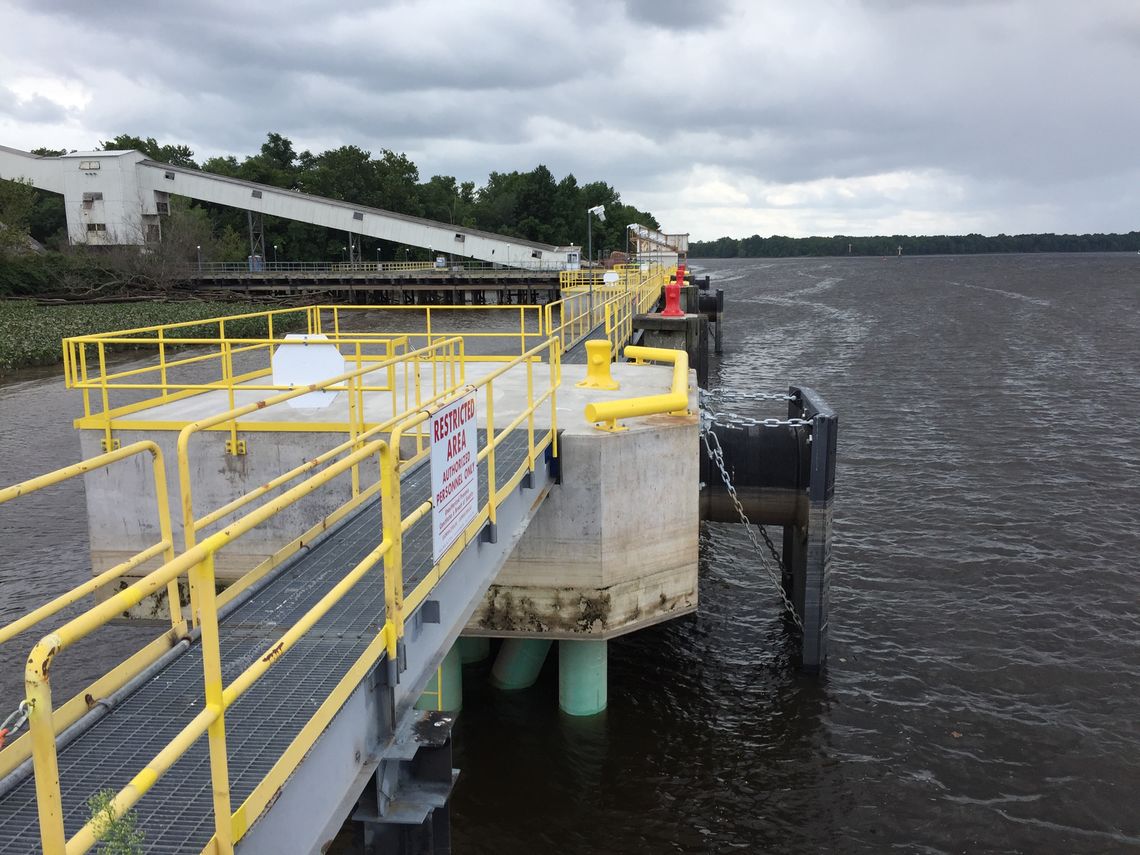 A view of the new dolphins forming a the breasting line.
Get in Touch
Peter Brennan, PE LEED AP
Deputy Practice Leader for Ports & Waterways
pbrennan@urbanengineers.com 215.922.8080