Americans have had a long-standing love affair with railroads and trains. As children, we would “ooh” and “ahh” at fancy model train sets. When we played Monopoly, we tried to buy up all four railroad properties (Reading, Pennsylvania, B&O, and Short Line) so we could collect $200 rent. We were enthralled when our parents would take us on a train ride into the city, where we were thrilled by the whistles blowing, horns blaring, and bells clanging as neighborhoods sped by outside the windows. Our history books taught us that the first public railway was the Baltimore and Ohio, and that the First Transcontinental Railroad was completed when a golden spike was driven in Promontory Summit, Utah Territory in 1869.

At around the same time that spike connected the rails that spanned from Oakland Long Wharf to Omaha, Nebraska/Council Bluffs, Iowa, the construction of the first buildings at the New Haven Rail Yard (NHRY) was underway. Theyard had already been active for two decades, being a part of a line stretching from New York to New Haven that was completed in 1849.

The NHRY would remain a beehive of activity for the next 50 years, witnessing the consolidation of the New York and New Haven line with the Hartford & New Haven line in 1872; the attempts to monopolize New England transportation by millionaire financier J.P. Morgan; and the opening of New Haven’s grand Union Station, a beaux-arts facility designed by prominent architect Cass Gilbert. Modern developments have included the 1983 formation of Metro-North Railroad, which operates the New Haven line under a joint agreement between the State of Connecticut and the Metropolitan Transit Authority, and the acquisition of the NHRY property itself by the Connecticut Department of Transportation (CTDOT) in the late 1980s. 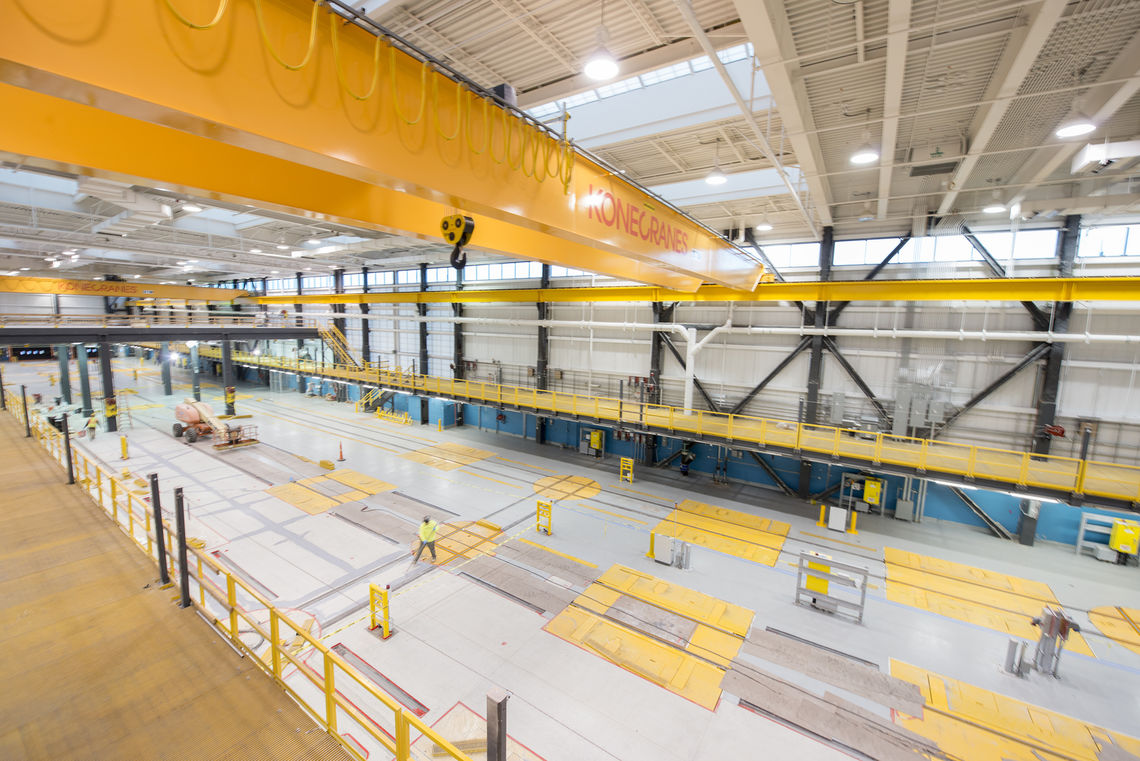 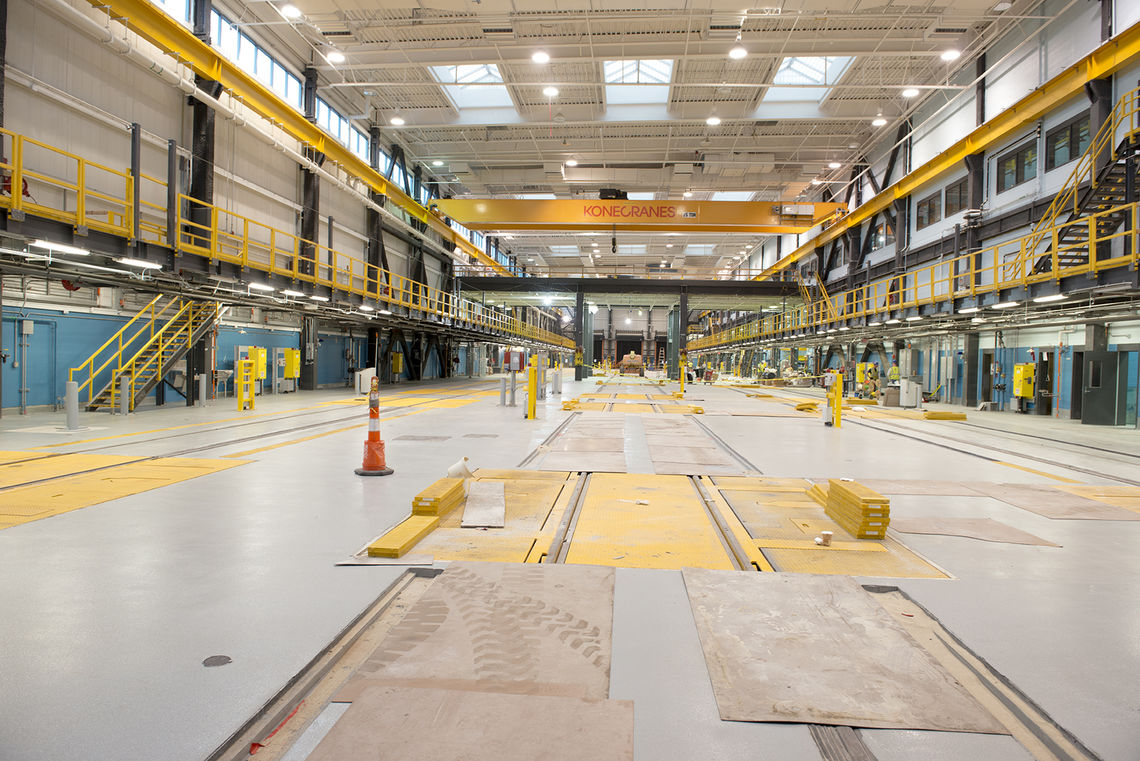 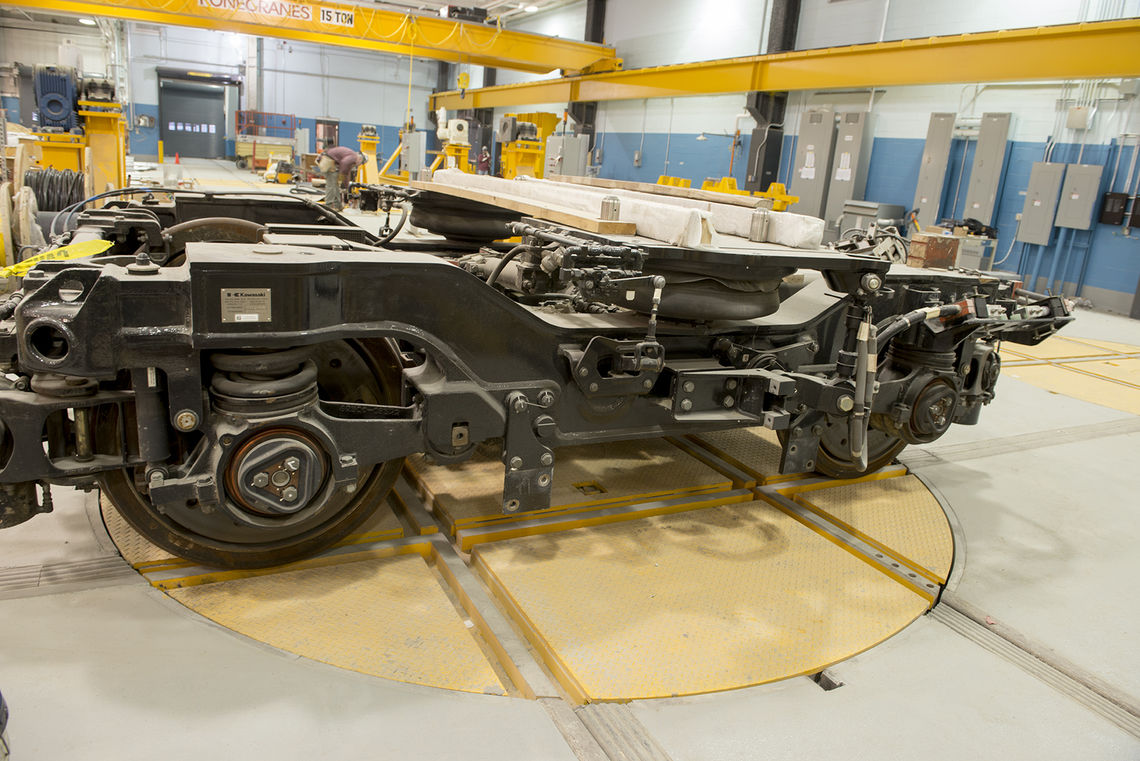 Past has met present, as work continues in Connecticut to preserve the New England railroads. CTDOT would make major investments over the next dozen or so years, but it wasn’t until 2005 that the NHRY Facilities Improvements Program would begin. The program focused on the new railcars – the M8 – that would replace several iterations of cars, some of which had been in service for nearly 40 years. By 2008, a Master Plan had been developed.

The first project in the NHRY program was the M8 Acceptance Facility. Overall, there are more than 15 “key” projects in the program, including half a dozen costing $50 million or more. The improvements to the NHRY, totaling $1.178 billion, will ultimately provide work for more than 1,600 rail yard employees.  The program represents a significant portion of an overall $2.8 billion investment in former Governor Dannel Malloy’s plan for transportation infrastructure improvements – rail, buses, bridges, and highways – “a 30-year vision for transportation to undo ‘40 years of under-investment.’”  Projects at the railyard include a diesel storage yard, a traction power substation, an independent wheel truing facility, a maintenance of way facility, a pedestrian bridge, and expansion of the transportation building.

The Jewel in the Crown – The CCO

The crown jewel of the improvements at the NHRY, however, is the $218 million Component Change Out (CCO) Shop, a nearly 300,000-sf facility that houses maintenance and support shops, storage units, testing systems, administrative offices, and more. Thirteen two-car units can be accommodated for repairs/maintenance simultaneously; that capacity, coupled with the ability to remove entire systems units (i.e., HVAC) – instead of piece-by-piece – enables Metro-North to get their cars back on the tracks quickly, increasing operational efficiency.

One of the earlier projects in the program (the design was completed in March 2009), the CCO serves as the “hub” project for future NHRY endeavors. For example, the CCO utility installations are also required for the Wheel True Facility, while the subsequent Yard Power Upgrade project is within the footprint of the CCO work area.

The completion of the largest facility in the yard required a prime consultant for construction engineering and inspection. CTDOT turned to Urban, who ensured compliance with plans and specifications; provided project administration; coordinated with state, city, and regional groups; and monitored utility and Metro-North Railroad Force Account work. The team also provided cost estimates and change order negotiations.

At the Maintenance-of-Way facility, a CM-at-Risk Pilot Project, Urban is providing scheduling and construction inspection services. The $35 million project, CTDOT’s first CM-at-Risk project in Connecticut, included the construction of a new 30,000-sf building, relocation of Brewery Street, and site development/reconstruction of both 1 Brewery Street and 152 Water Street. The Maintenance-of-Way facility was constructed on the site of the former Connecticut Freezers facility, which was demolished in 2014. 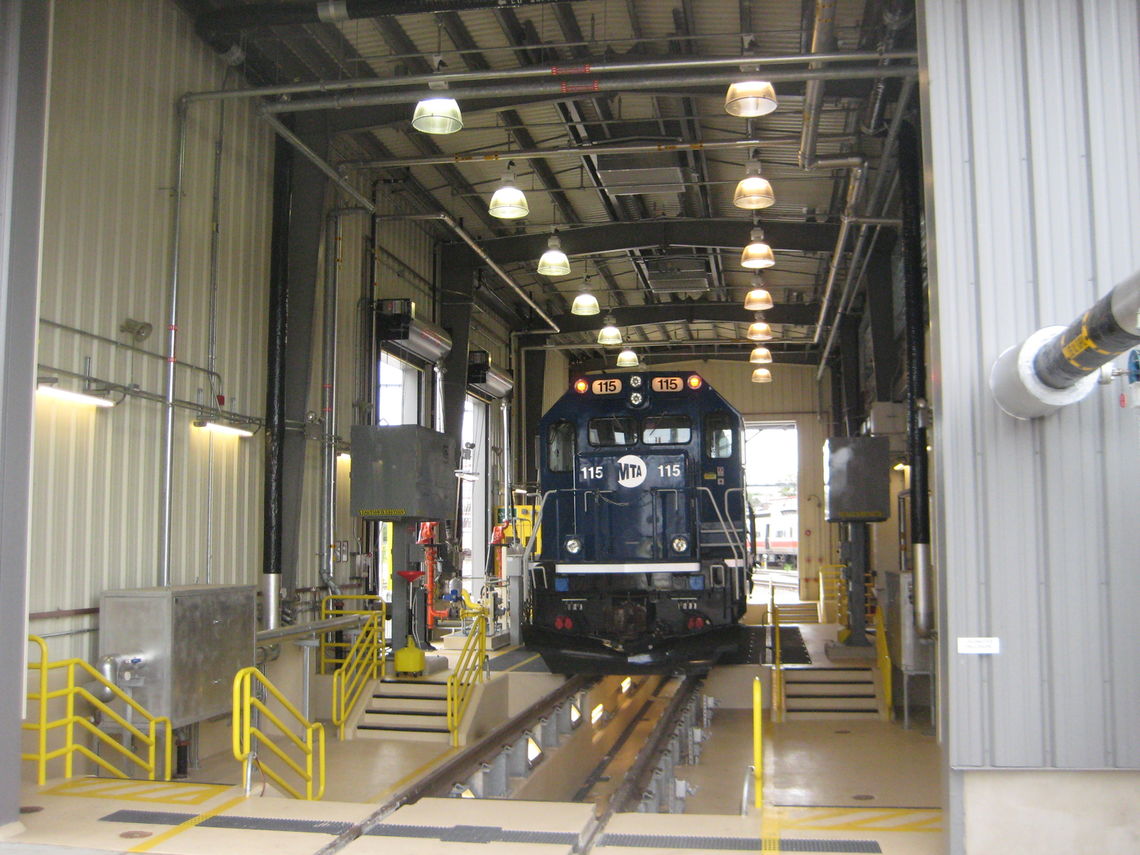 CTDOT sought a prime consultant for construction engineering and inspection services, including scheduling review services, related to the construction of their $20 million Central Distribution Warehouse. Urban was tasked with these services. This project includes construction of a new Automated Storage and Retrieval System robotic warehouse required for the overall New Haven Line to serve as the main distribution point for housing material for the storerooms contained within the individual shops, as well as for major components of the M-8 cars.

The Urban team was also brought in to serve as the prime consultant to provide construction engineering and inspection services for the demolition, construction, and renovation of a fueling facility located at the railyard. The $16 million fueling facility improvements consisted of constructing a 100-foot-long by 30-foot-wide locomotive enclosure with support rooms, pump house, sanding facility, off-loading canopy, containment slab, and fuel storage tanks. The project also included renovating the generators building and the fuel operators building, a single-story, 44-foot-long by 10-foot-wide facility.

Now, the fascination with railroads is coming full circle in our own lives, with our children – and grandchildren – experiencing the joys of trains and rail travel, and its projects like those at the NHRY that will keep railroads vibrant and viable for them and future generations.