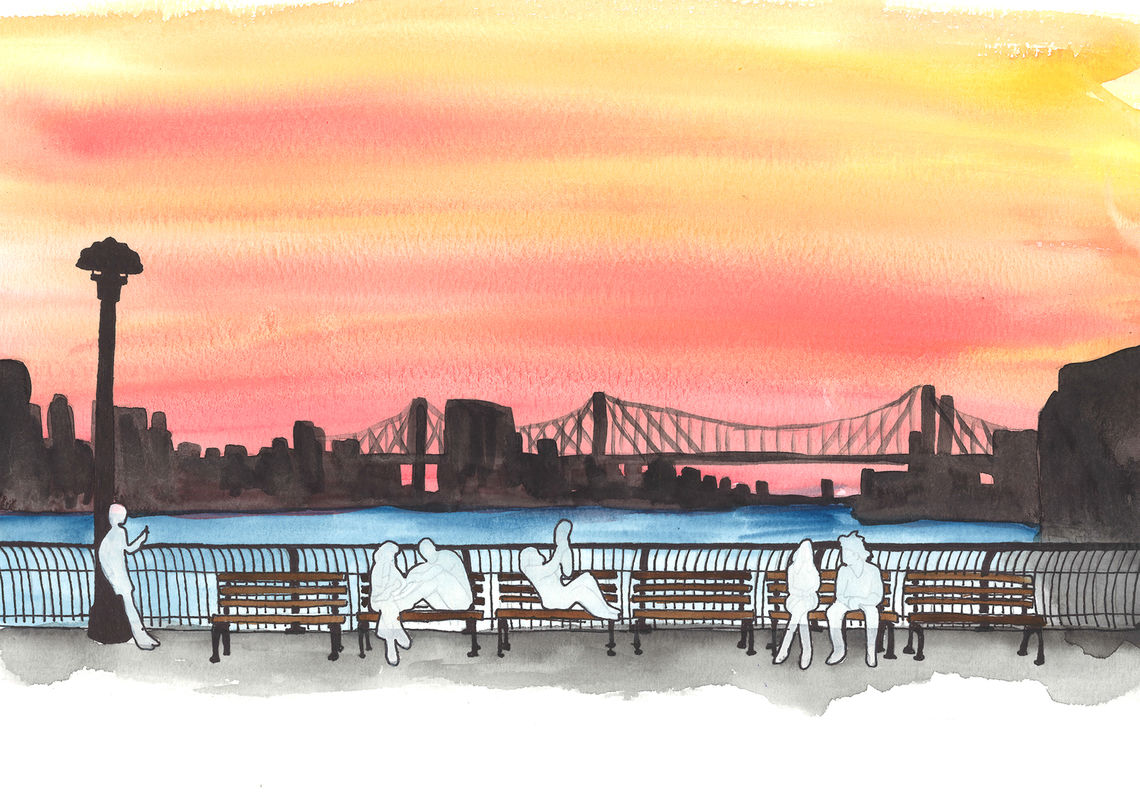 Despite excellent views of the Manhattan skyline, deterioration of 44th Drive Pier along the East River in Queens made it an unappealing waterfront spot. It was as if a curtain has been pulled to shield the amazing window facing the city. Aiming to recapture this public space, the New York City Department of Parks & Recreation sponsored reconstruction of the pier. It has been a hit with both locals and tourists alike.

“This is beautiful. It’s a different perspective of New York City,” said John, a Kentuckian who visited the pier with his companion based off of a recommendation from the concierge at the local hotel where he was staying. “I’d like to take this back home to Louisville. The better view of the city itself is from across the river.”

The pier is a new selling point for hotels close to the pier, like the Wyndam Garden, the Z NYC Hotel, and the Ravel Hotel, who offer visitors to New York an actual view of the iconic skyline, which isn’t available to those staying downtown. It is also an added bonus for the residents of 4545 Center Boulevard, a high-end luxury condo building nearby.

The space is also a big draw for the Long Island City community. It will be a premier destination in the summer, and especially during the Fourth of July, when New York City puts on one of the country’s largest and most iconic fireworks displays. 44th Drive Pier will be a prime location to watch the action. But the holiday is just one item to the long list of benefits this project will bring to the surrounding community.

The pier now features a new railing, fencing, benches, and lamp posts. It’s an amenity for locals and residents, as well as patrons of Anable Basin Bar located just next to the pier. The space will likely draw people enjoying the views to the local watering hole and other neighborhood businesses.

“New York is a city of islands, and expanding public access to the waterfront is a priority for NYC Parks,” -Queens Parks Commissioner Dorothy Lewandowski

Another innovative aspect of this project is the surface pattern on the pier’s deck. The deck is composed of an overlapping rectangular grid and overlapping segment bands with circular segment bands made from crushed glass. The visual texture of the glass contrasts with the adjacent concrete and contributes to the deck’s modern and unique aesthetic.

This project has recaptured a waterfront park, which had been poorly maintained and unused, and reestablished public access to the waterfront in an area in need of improvement. As a result of this reconstruction project, the pier was listed in the top five “Best Places with Scenic Views in Queens,” by the popular search-and-discovery social network Foursquare.

“New York is a city of islands, and expanding public access to the waterfront is a priority for NYC Parks,” said Queens Parks Commissioner Dorothy Lewandowski. “We’re grateful to have reopened this amenity so that residents and visitors to Long Island City can once again enjoy the impeccable views that this pier offers.”

Now a popular lunch time spot, locals and nearby workers will often take a lunch break at the pier. It's a great spot to meet for coffee, or share a romantic moment with a loved one. The community is finding the pier very accessible too, and visit it on foot, by bike, and even skateboard. The pier is a short two blocks from Gordon Triangle, a New York City Parks Department maintained space located at the intersections of Vernon Boulevard, 44th Drive, and 10th Street, which is already a popular outdoor spot to sit and take in the neighborhood.

In addition to all its added recreational benefits, the pier also has some added safety benefits. Two gates were installed along the fencing and can be used by the U.S. coast guard in the case of an emergency along the East River. The space is accessible to first responders, and the gates allow for an easy transfer from a boat to an emergency vehicle if needed.

A River Runs Through It

Working on a project site over water is never easy. The pier’s marine location in a dense urban neighborhood, along with other factors, made reconstruction challenging. This project required removal and replacement of an old sewer outfall and its encasement with a new reinforced concrete pipe and poured-in-place concrete encasement. That meant concrete had to be poured underwater.

This was accomplished by building a cofferdam and dewatering area to create a dry site in the river to pour the concrete. The alternative would be using an underwater concrete mix that would have increased the cost of construction. The cofferdam solution helped keep this public project within budget, to the satisfaction of the city. Installation of the cofferdam —a challenging endeavor to accomplish along a large river—created a dry area under the bridge for the piles to be installed. 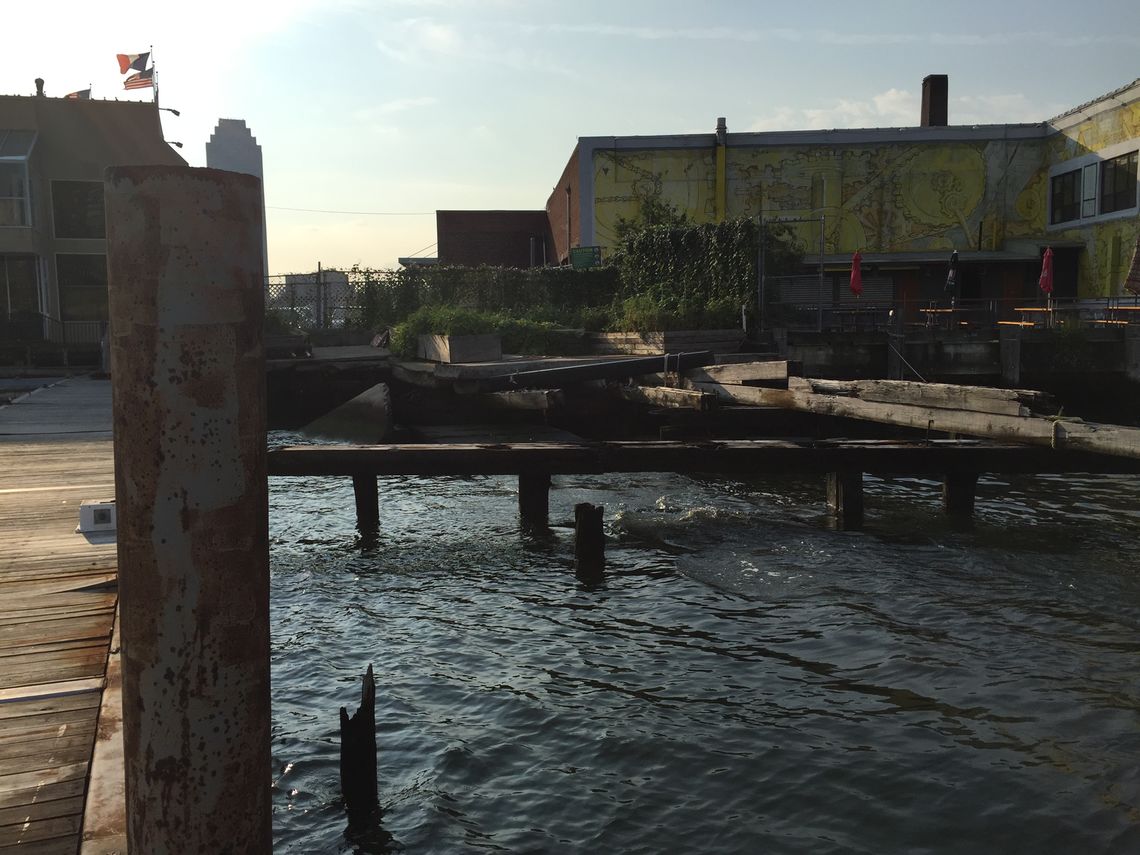 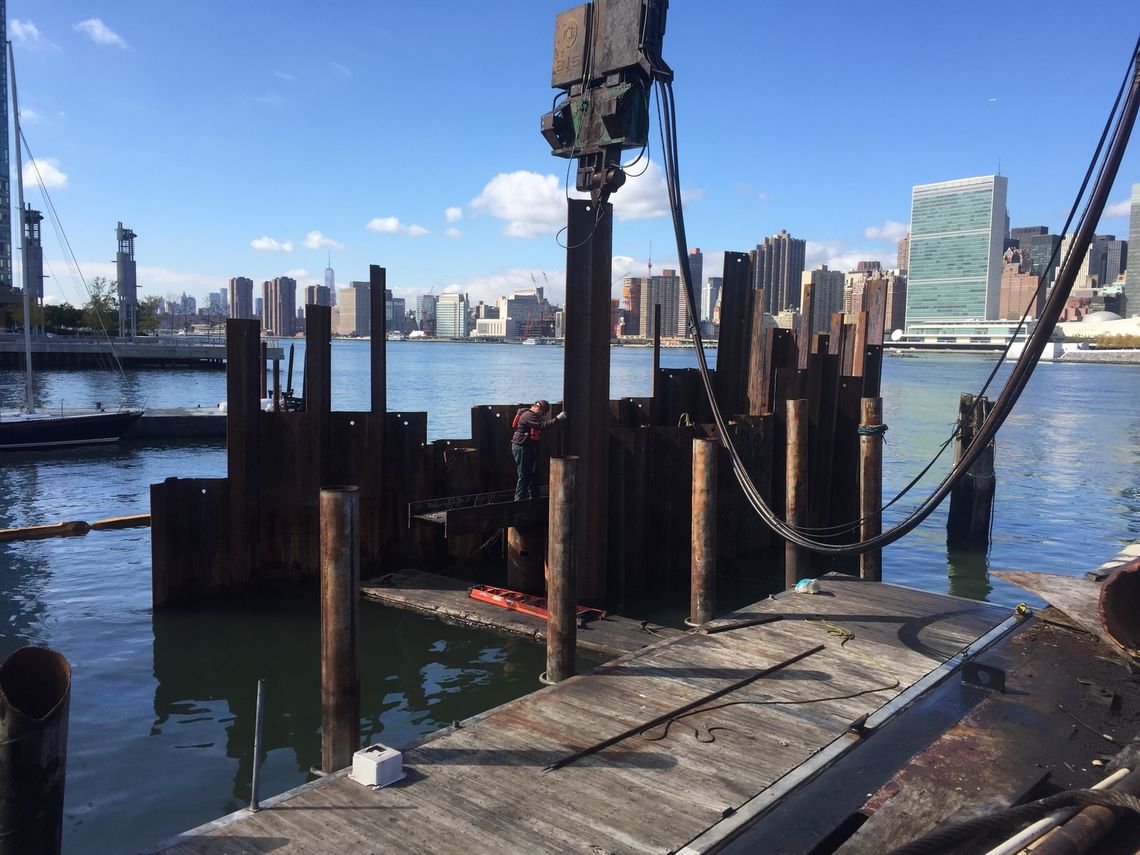 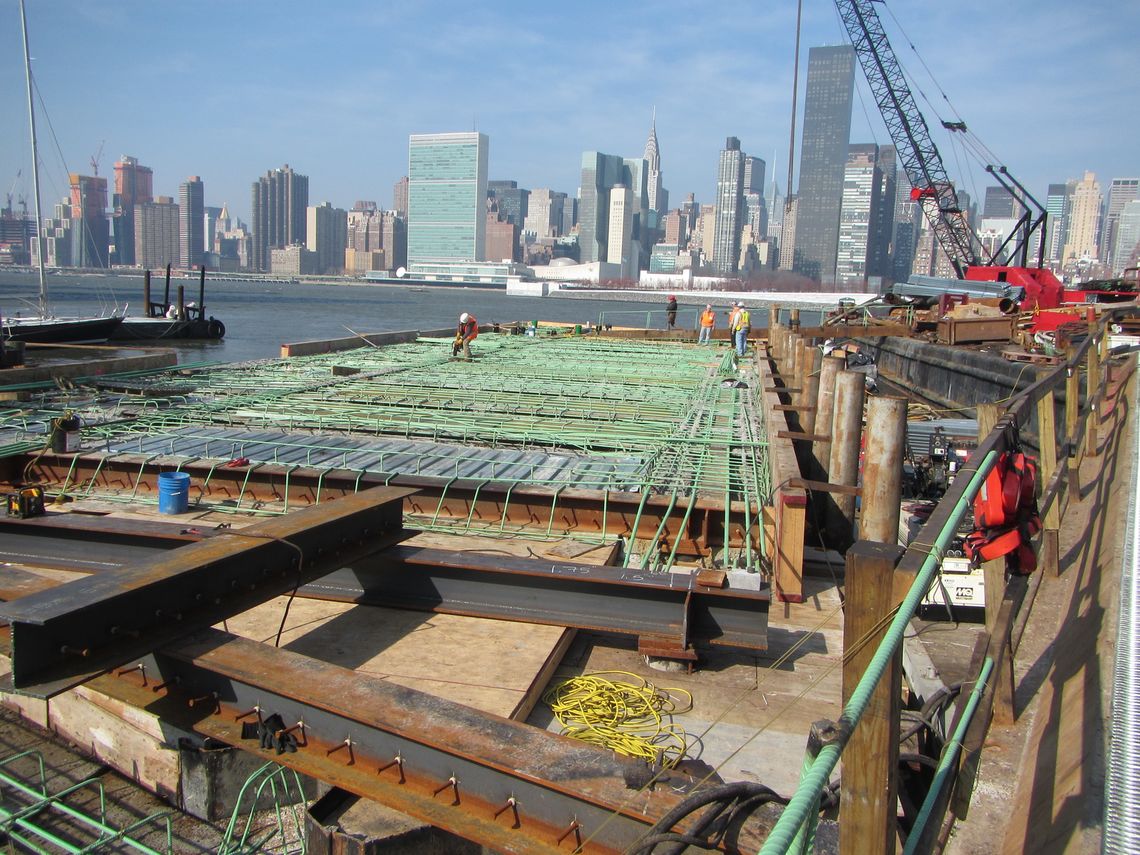 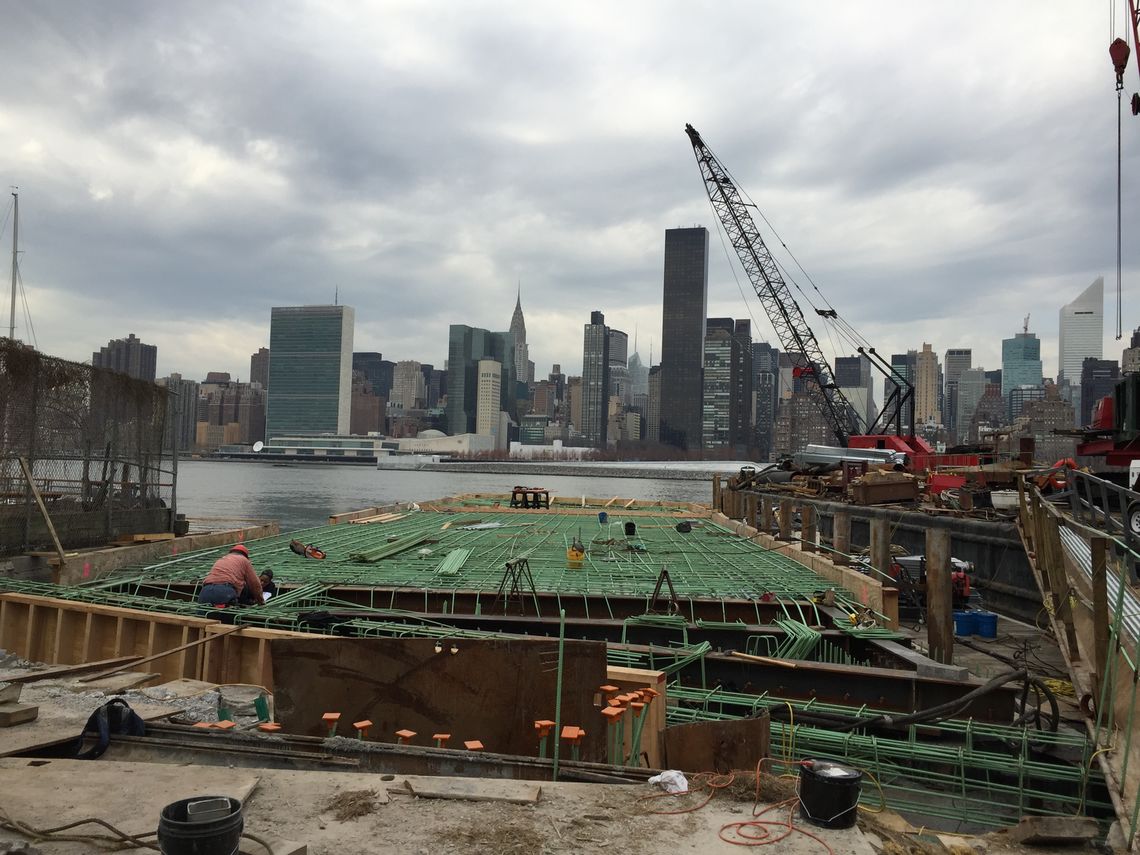 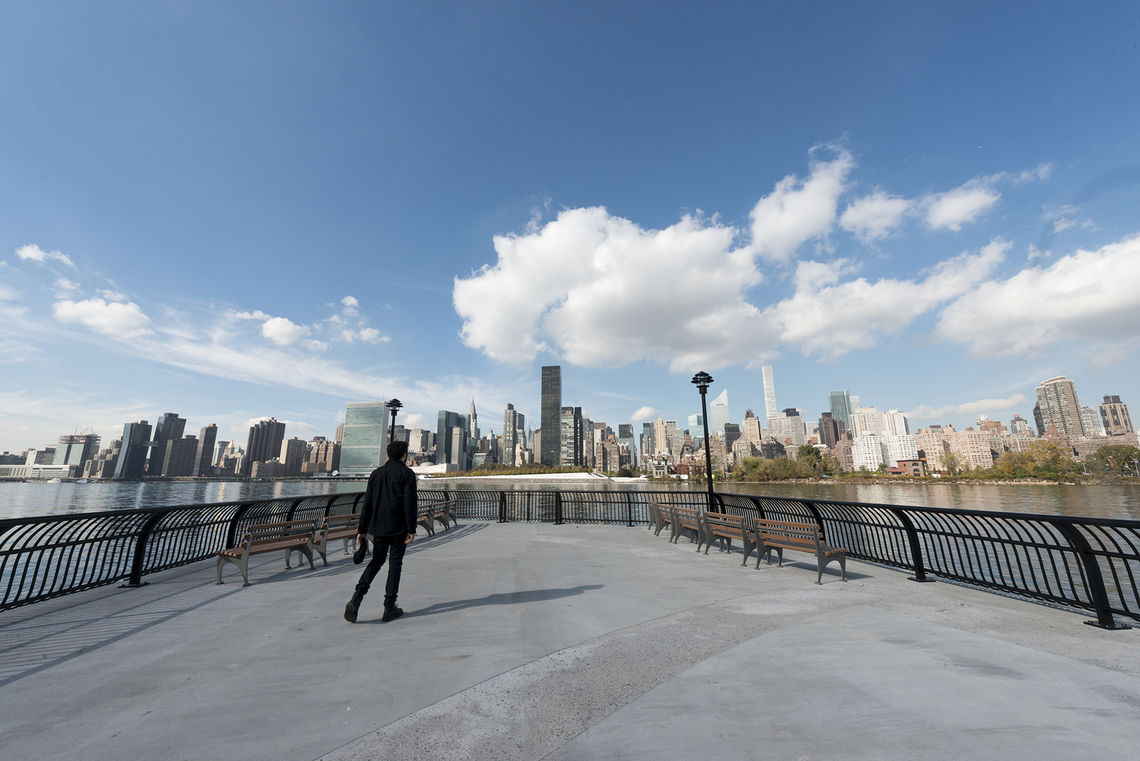 The project also entailed demolishing an existing 66-inch diameter combined sewer outfall that was encased in a concrete box. Coordination of the removal and replacement of the sewer chambers was completed in compliance with the Department of Environmental Protection. New supports for the encasement were provided using concrete pile cap support with concrete-filled steel pipe piles.

Consideration for local businesses was very important during installation of the cofferdam. Rather than take up space in the area and inconvenience businesses, a mounted crane on a barge loaded and moved large and heavy material.

“We are thrilled with the outcome and excited for the public to get reacquainted with this beautiful space.” - Urban Project Manager Oscar Bustos, PE

Urban Engineers’ team provided construction management and supervision services and served as the owner’s representative on this project. Urban was also responsible for inspection during the removal and installation of the pier piles. Through dynamic design and diligent and innovative construction supervision, the project was completed within budget and six months ahead of schedule.

“It enhanced the beauty of Manhattan behind it,” said Urban Construction Inspector Juan Tejeda of the project. “We introduced a new structure where people can take a load off and look at the city bridges, Governors Island, and iconic buildings like the United Nations.”

As a testament to the success of 44th Drive Pier, visits to the pier are now part of many residents’ routines. If you venture out to the pier at 8:00 am during the week, you are likely to see someone who has made the space their morning yoga spot, a stop on a morning job, or the highlight of a bike ride made before work.

“It was important to us to understand and respect New York City’s waterfront during this project,” added Urban Project Manager Oscar Bustos, PE. “We are thrilled with the outcome and excited for the public to get reacquainted with this beautiful space.”

Urban will be recognized for its work on the pier with a Gold Award in the Structural Systems category at the ACEC of New York’s upcoming Engineering Excellence Awards gala.