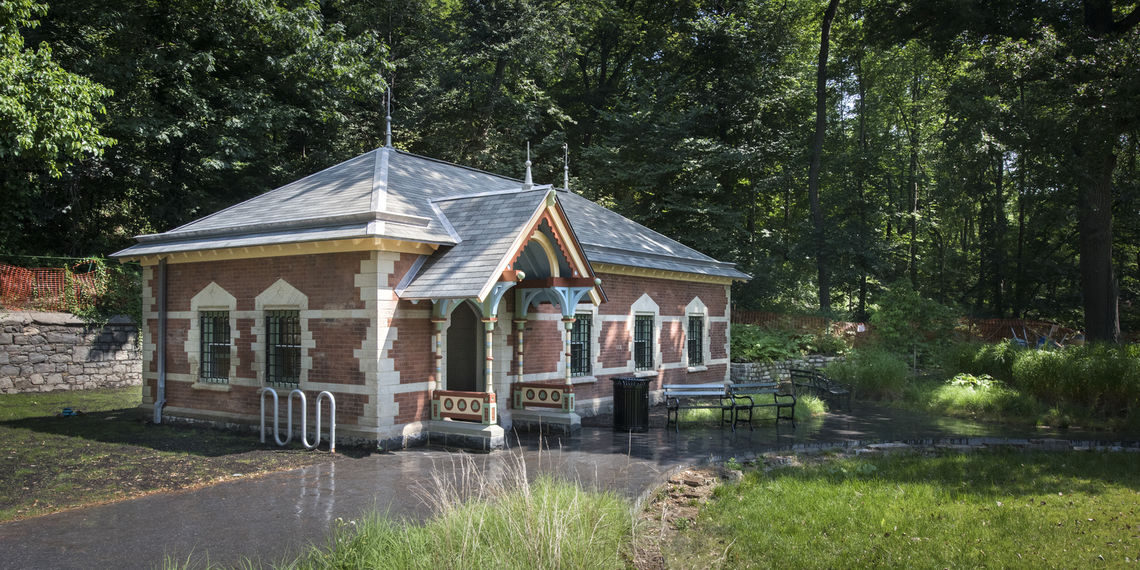 Urban provided special inspections for the reconstruction of one of the oldest wellhouses in the country, converting it into a sustainable restroom for use in a park visited by eight million people annually.

Not many things are functional after nearly 150 years, but the wellhouse in Prospect Park in Brooklyn was recently given new life after almost a century and a half of life. Originally built in 1869, the facility is located in the public space designed by renowned architects Frederick Law Olmsted and Calvert Vaux. Water features were key to the park’s layout, and the wellhouse was built to pump water into its lakes and fountains.

At its creation, the wellhouse was considered an archaeological achievement. The facility connected to an underground cistern that could be viewed through a glass dome above. Once the park to the New York City water system in the early 20th century, the wellhouse became obsolete. Overtime, the cistern was filled in, glass dome removed, and an existing chimney was demolished, leaving just the wellhouse to remain and decay.

After remaining unused by the public for 80 years, the Prospect Park Alliance looked into renovating the building as a part of the park’s overall beautification process, which also included upgrades to its carousel, boathouse, and the Bailey Fountain. Park visitors had requested more bathrooms for the park, so it made sense to convert the facility into a comfort station, allowing it to regain use and keep original design features in the vein of Olmsted and Vaux. With funding from the New York City Council, the alliance moved ahead with the projects. Being a steward of sustainable practices, it was planned for the renovated building to be a composting station that would utilize toilets that use 97% less water than a typical toilet, and converts waste into compost. It is estimated that the new facility will be saving about 250,000 gallons of water a year from going into the New York City sewer system.

Urban Engineers was brought in by the Prospect Park Alliance to perform special inspections. As is required by the New York City Building Code, Urban examined materials, operations, and equipment to ensure technical compliance with the requirements of the plans and specifications for the facility’s construction. The scope included the restoration of the existing historical wellhouse building and the enlargement of the existing basement, as well as the underpinning and concrete work below grade. 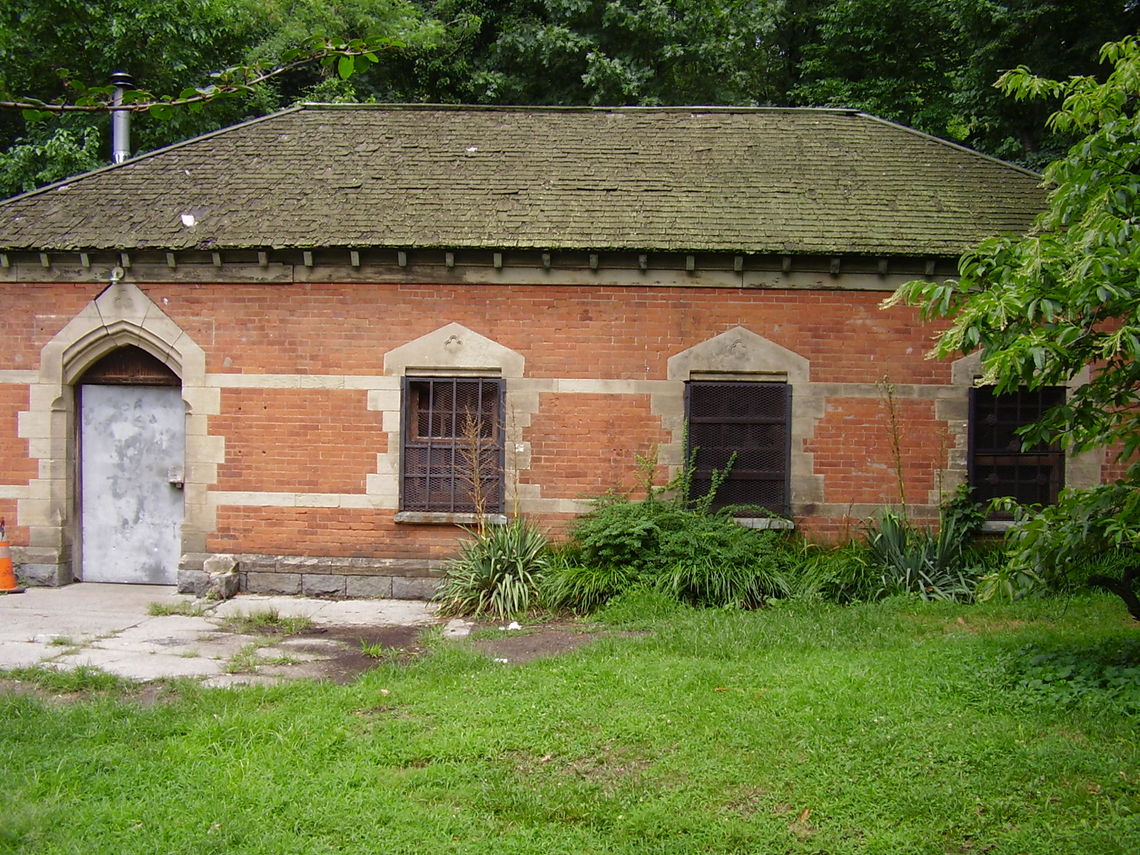 An existing image of the wellhouse before the reconstruction.

This project not only required renovation of one of the oldest structures in Prospect Park, but also the creation of the first composting restroom in a public park in the entire city. The old building had not been in use for 80 years. It is common for a structure to be demolished and replaced in cases like this, but it was important to the client, and to most of the public, to retain the character of the park and remain connected to its origins. This required all partners in the project to take historical context into consideration, and update the facility accordingly.

As this was the first composting restroom in a public park for New York City, it was important that construction went smoothly. Many techniques were used to preserve the structure. The wellhouse sits at the bottom of a hill. A retaining wall behind the facility had become deficient over time, so it was restored to protect the building. When dealing with the wellhouse’s foundation, careful and meticulous underpinning had to be performed in stages to protect the existing foundation and superstructure.

The new bathroom was conceived as a compost station that would utilize toilets that use 97% less water than a typical toilet,

After 80 years of abandonment, the wellhouse will be getting full time “residents” in the form of thousands of worms. These worms rest in the composting tanks beneath the facility. In 10 years’ time, they will have made live-enriching compost. 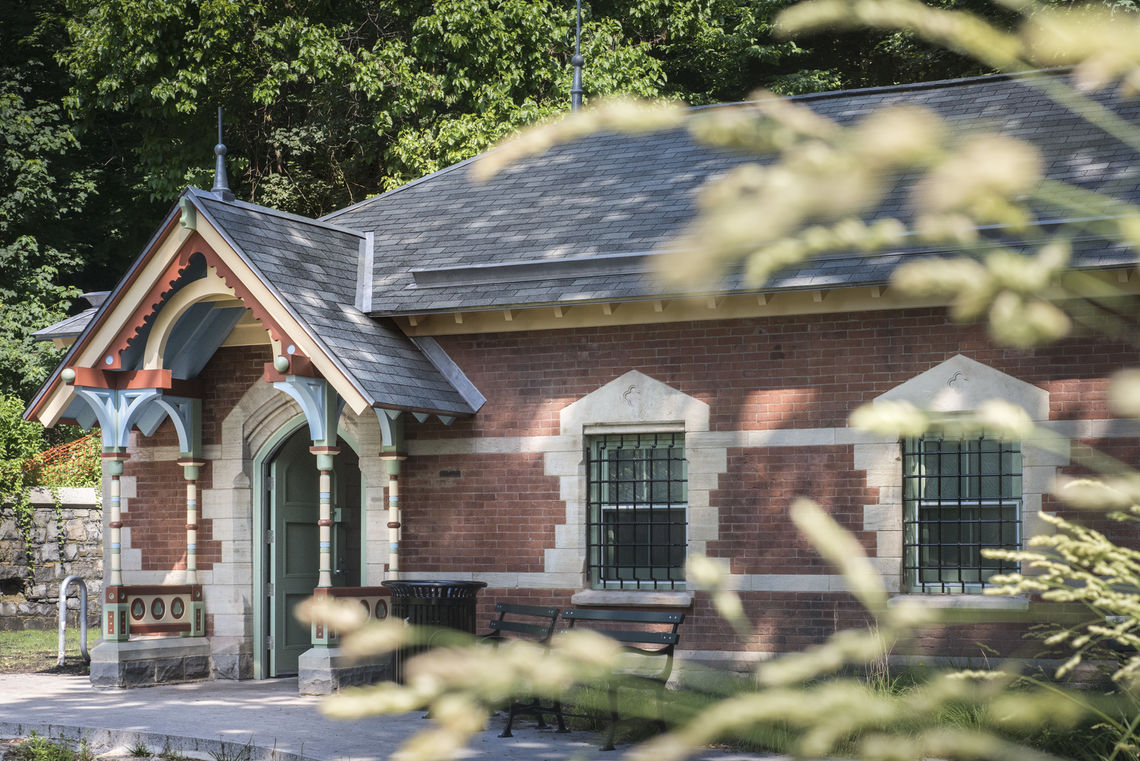 There were many challenges that Urban faced in approaching this project. The building had fallen into disrepair, so the rook and walls needed to be stabilized. The historic building’s foundation was old, and required complex underpinning to protect it and the superstructure. Structural stability was achieved by sequentially removing existing footing toes, driving soldier piles, and then bracing steel welds to them.

It was important that the historic elements of the building – and the design of the original architects – were retained in the renovation. A new roof that was installed and brickwork repairs were done in accordance with historic photos to recreate a beautiful portico in period-appropriate colors.

The list of special inspections that Urban performed included: