Long an uninviting apron of concrete around Philadelphia’s City Hall, Dilworth Park re-establishes William Penn’s original Center Square as a central gathering place for all Philadelphians – residents, workers, and tourists – while also facilitating easier and safer transit connections to the City and region.

From Plaza to Park
Working for the Center City District (CCD), the design team was led by Urban Engineers, which collaborated with architects from KieranTimberlake, OLIN, and structural engineers from CVM, to transform this three-acre plaza in the heart of Center City. The team’s design effectively recaptures the vision of William Penn, who designated the site as one of the five original public squares in the City.
From start to finish, the project was meant to be inclusive. Planning and design for the $55 million transformation began in 2007, and more than 60 meetings were held with various stakeholder groups that reviewed and commented on its design. Following publicly advertised open meetings of the City of Philadelphia’s Art and Historical Commissions, City Planning Commission, and City Council, the project was formally approved. After just over two years of construction, new Dilworth Park reopened this September. 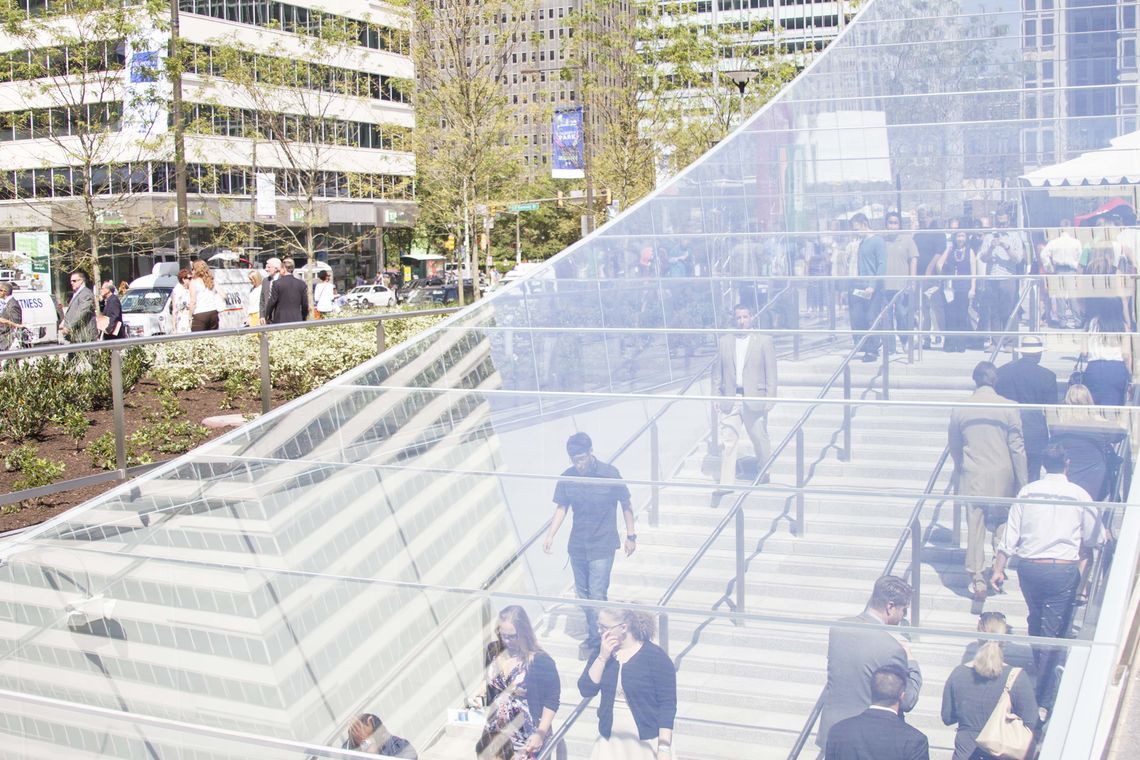 The work has transformed the West Side of City Hall, the People’s Hall, into an inviting, green, transit-oriented park for all Philadelphians and visitors to enjoy.

Restoring Balance
A historic nexus of transportation, Southeastern Pennsylvania Transportation Authority’s (SEPTA) subway, regional rail, and trolley lines intersect at City Hall, transporting 305,000 passengers through Center City each day. In the old Dilworth, connections between the transit systems were incoherent or nonexistent. The concourse was dark, uninviting, and exposed to the elements. The area above ground consisted of a large sunken court with a series of walls and stairs, no better than a ‘mouse maze’ for pedestrians. 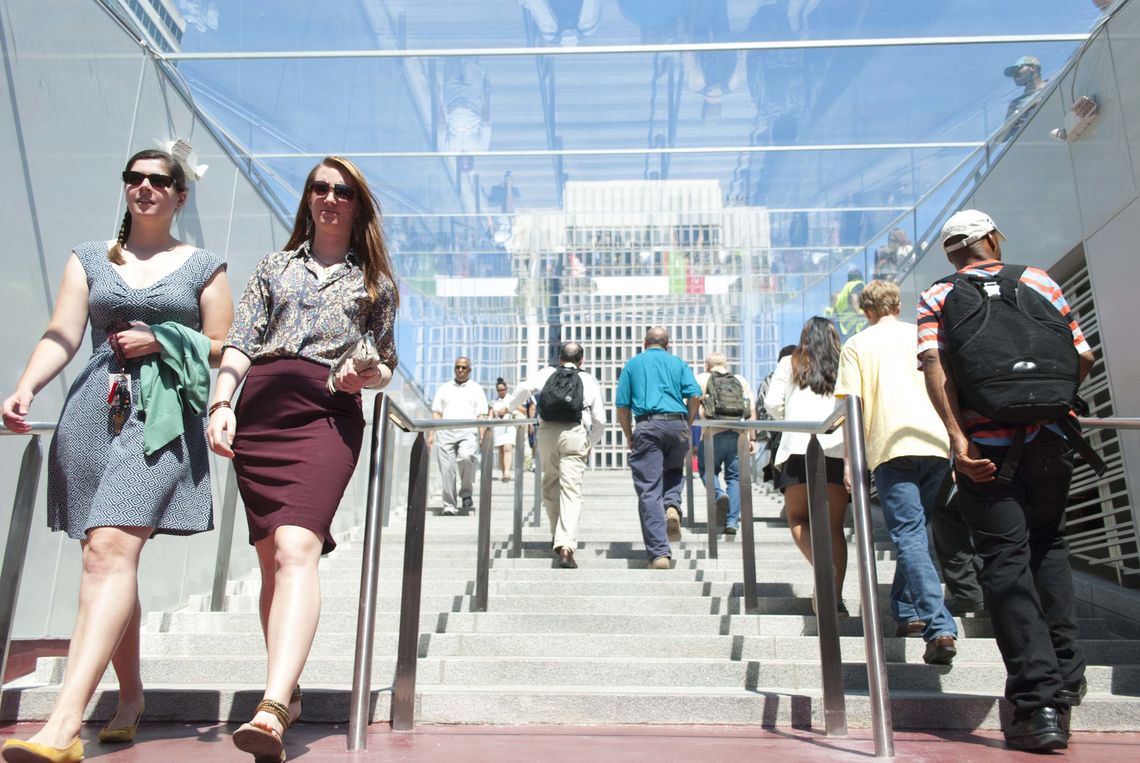 Working in partnership with SEPTA, new entrances have been created to the trolleys and both the Market and Broad Street Lines, turning Dilworth Park into the primary Center City transit gateway to the Sports District, Temple University’s campuses, University City, and restoring the balance of transit in Philadelphia. New elevators make transit lines ADA accessible for the first time, and new stairs, sheltered by clear, 96-foot-long glass pavilions, allow daylight into the existing concourse level, reducing the need for artificial lighting and improving the experience of transit users. The project has also completely reconstructed the concourse level into one well-lit transit room with clear lines of sight, and a range of new signs that guide transit passengers to the subway, trolley, and regional rail lines. About 12,000 square feet of granite from the original plaza was reused to create the feature wall in the concourse. Additionally, two LCD panels will display real-time information for five trolley routes servicing University City and West Philadelphia. Amazingly, the new concourse was built over operating train lines, with only one train line shut down for one weekend during construction. 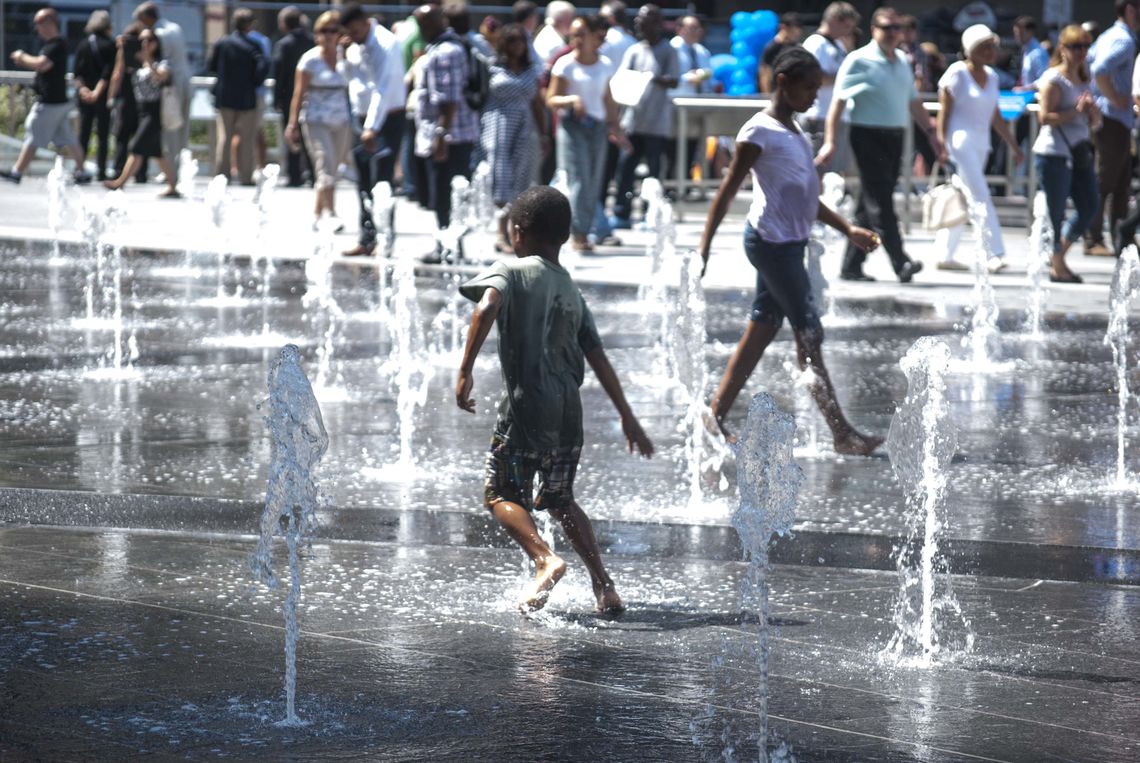 The Water at Work
The new Dilworth Park is located on what was the city’s first water works and first public fountain in the 18th century. The new design reflects this precedent through the collection and purification of on-site rainwater, which is detained, collected, filtered, and re-used for irrigation. The irrigation system uses a 15,000-gallon cistern (under the lawn panel and planters adjacent to the glass pavilions) that is designed to meet 100% of the site’s irrigation needs, eliminating the need for potable water. Dilworth Park’s most obvious attraction, an 11,600-square-foot, programmable water feature, features 240 water jets and is fed entirely with recycled rainwater.

The new trees increase the existing tree canopy by 26%. They are the first interceptors of rainwater allowing for a sustainable reduction of stormwater into the combined sewer system. The tree species selected are conducive to city settings and include honey locust, black locust, Katsura and London plane. 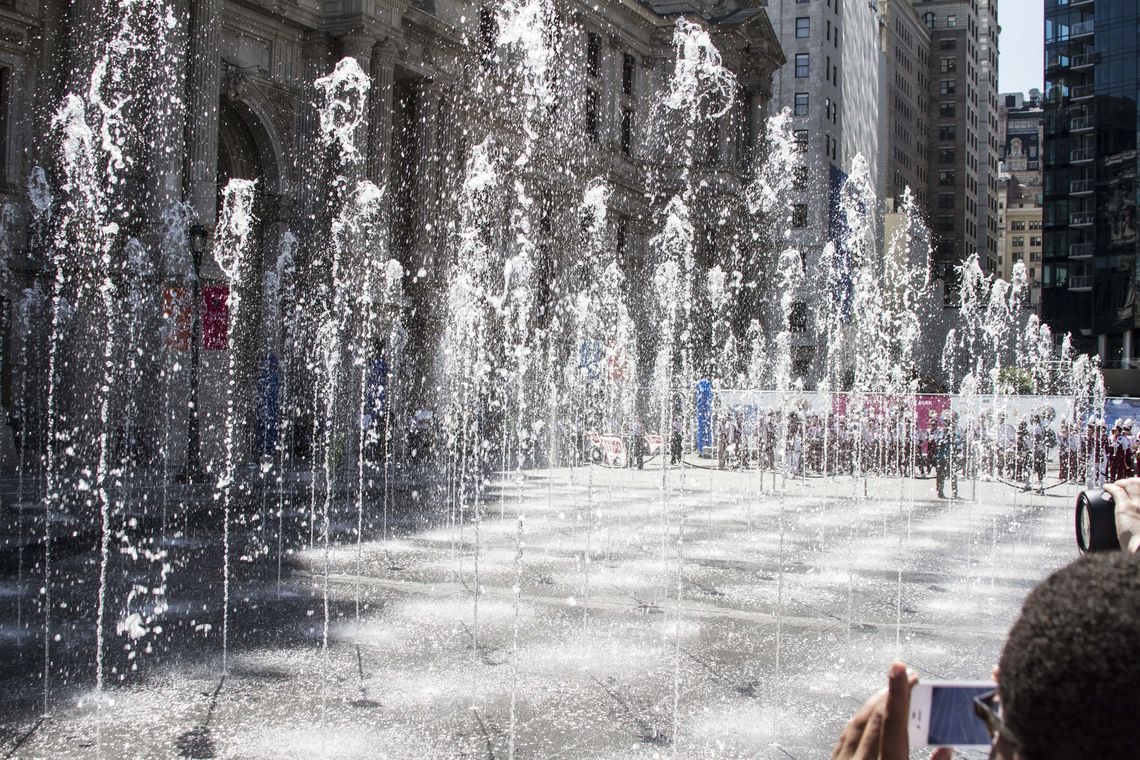 Clean, Safe, and Beyond
The CCD has a 30-year lease with the City to construct, maintain, and manage Dilworth Park as a public park. The CCD will assume all cleaning, site and landscape maintenance, and programming responsibilities. Events have already included movie nights, fashion pop-ups, and concerts. From November to February, CCD plans to turn the fountains into an ice skating rink. A new café with outdoor seating, called Rosa Blanca, is operated by Jose Garces, one of the most gifted chefs and restaurateurs in the country. The CCD has successfully created programming for the other parks it manages: Sister Cities Park at 18th Street and the Benjamin Franklin Parkway; Cret Park at 16th Street and the Parkway; and John F. Collins Park at 1707 Chestnut Street.