A once-thriving industrial city, New Britain (City) is working hard to regain momentum after years lost to economic downturn. For the first time in a long time, the City has a comprehensive plan in place to do so.

The Complete Streets Master Plan for Downtown New Britain (Plan) is a guide that leverages the City’s rich assets to create a more pedestrian-friendly, attractive, and livable environment throughout downtown.

Funded through a HUD Sustainable Communities Grant, the Plan was developed by an Urban Engineers-led team, whose work was guided by a large group of stakeholders that included residents, business leaders, members of the arts community, and public officials. The Plan has been supported by three mayoral administrations and embraced by local leaders, leading to an invigorated belief in the future of the downtown by the community as a whole. Improvements outlined in the Plan have already been used successfully to help the City convey its vision to developers, funding agencies, and those already living and working there. It has also helped the City identify and prioritize the projects that will bring the vision to reality. In 2014, the project received the Award of Excellence for Public Space from the Connecticut Main Street Center.

Although master plans can easily be derailed by numerous variables, such as funding or lack of political support, this one has found the right mix of elements to be successful.

Vision – The Director of Public Works for New Britain for the past 10 years, Mark Moriarty was not content doing the “normal job” of a public works official; he was committed to realizing a greater vision. “I wanted to capitalize on all the great things that New Britain has,” he said. Moriarty believed that by focusing on the downtown area, the City could change its future.

Opportunity – The City previously identified the $572 million CTfastrak Project as a tremendous opportunity for transit-oriented development in its 2008 Downtown Development Plan. CTfastrak will provide Bus Rapid Transit (BRT) along a 9.4-mile dedicated busway corridor between New Britain and Hartford, and also includes a five-mile, multi-use trail from Downtown New Britain to Newington Junction. 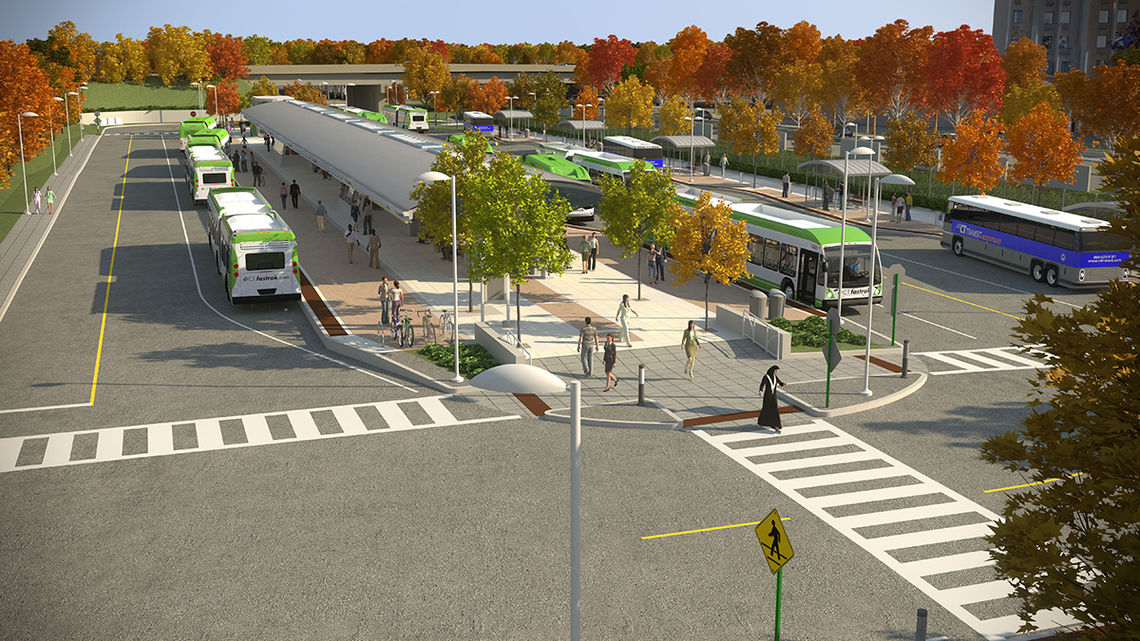 With the CTfastrak’s BRT terminus station opening just blocks from New Britain’s core, the City hopes to maximize transit-oriented development and employment opportunities downtown, as well as support bus ridership and improve the quality of life for those who live and work there. This major infrastructure investment will provide residents, commuters, and visitors reduced travel time for employment, recreational, residential, and commercial opportunities throughout the region.

Leveraging Rich Assets – New Britain rose to prominence as an industrial and manufacturing city, and in the early part of the 20th century became known as the “Hardware Capital of the World.” Like many industrial cities though, New Britain later fell on hard times. Urban renewal efforts during the 1970s and 1980s further degraded the downtown area by creating a street network that heavily favored vehicles over pedestrians. Today, many of the City’s best assets are still in place, such as the dense, walkability of downtown, the many beautiful, historically significant buildings, and open spaces. Steve Schiller, the City’s planner, said, “The street system has good bones and the street wall of buildings being close to sidewalks gives a human scale.” While working for the City for 29 years, Schiller has seen his share of attempts to remake the downtown, but nothing as comprehensive as this plan. “It’s an enormous change in thinking from how things have been done in the past,” he said. 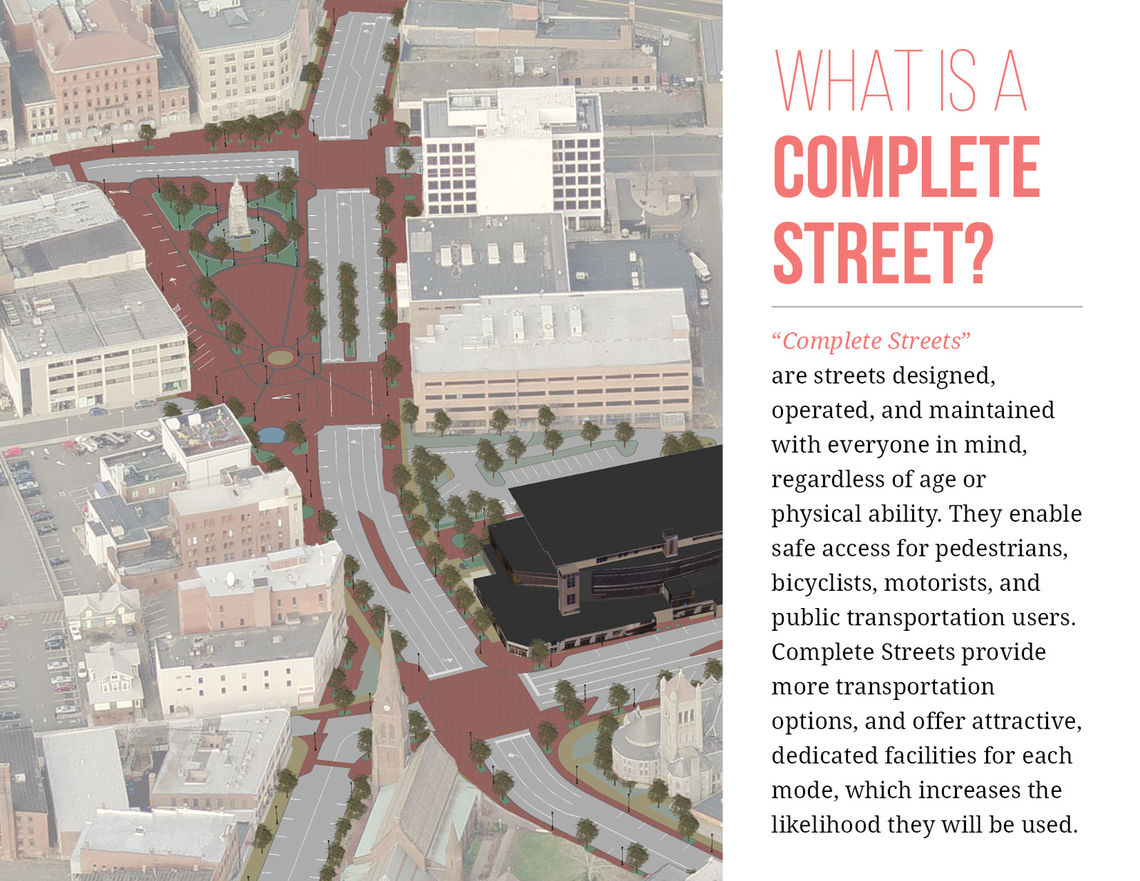 ​Political Continuity –  Often, planning documents are directly affiliated with a single mayor’s agenda, and are disregarded if there is a change of administration. Not so in New Britain. While the planning and implementation process associated with the Plan has spanned three mayors representing both major political parties, the strong support of City leaders has never wavered.

Mayor Erin Stewart, a lifelong resident of New Britain, said, “We’re not talking about what New Britain used to be anymore, but what it’s going to be. The Master Plan has us all moving in the same direction with a main goal at the end.” Mayor Stewart is not the only one with a stake in the success of the Plan. Her father was the mayor in 2008 at the time the City began initiating some of this groundwork. “I hope to finish what he started,” she said. 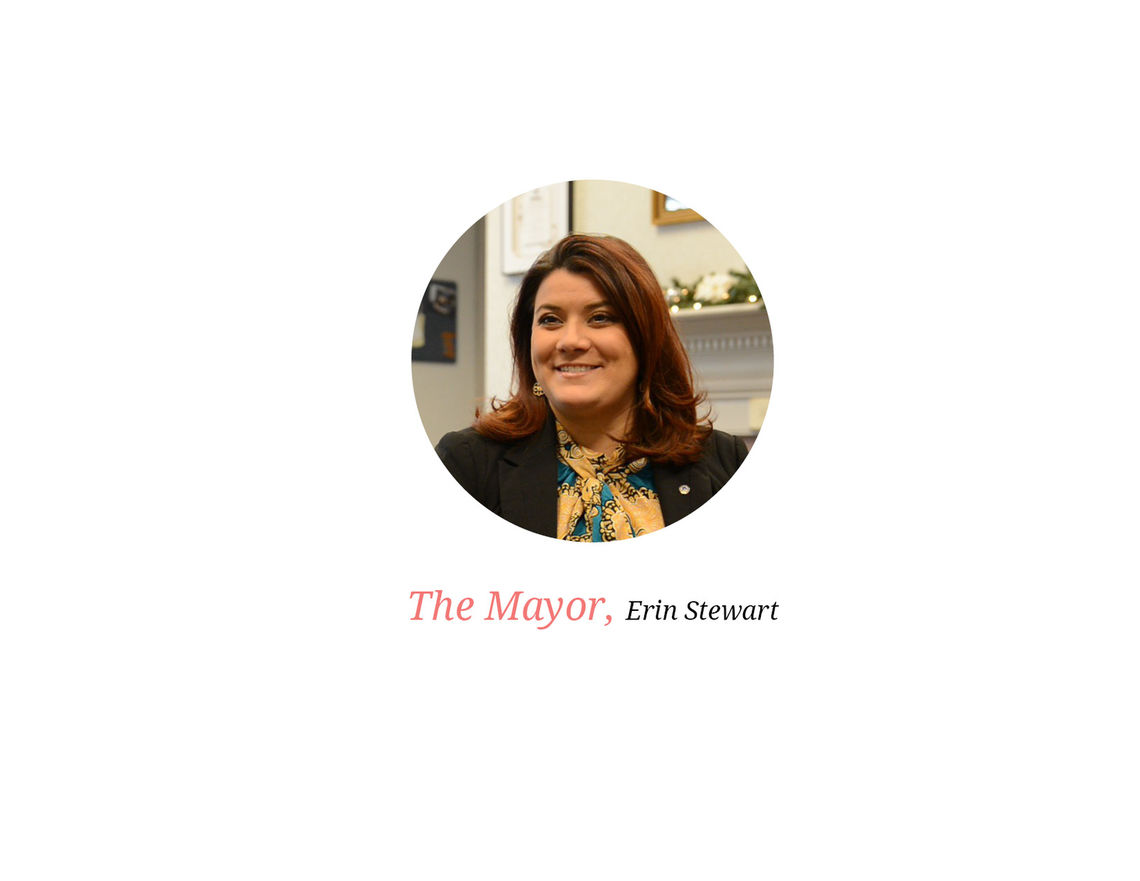 ​Incremental Approach – Overall, the Plan identified more than $25 million of improvements. Even before the Plan was completed, the value of improvements suggested have been widely recognized and supported by many state and federal agencies. Grant funding is in place for many improvements and construction has already begun.

The City has been successful getting the funds because its projects exemplify what grantors look for – economic development, infrastructure development, and community.

In less than three years, the project has leveraged a small investment of federal HUD grant money ($212,500) to develop a comprehensive Plan that has already resulted in the City being awarded more than $9 million in competitive state and federal grants. This included a Federal Highway Administration (FHWA) Transportation, Community, and System Preservation Program Grant for $1.3 million; a state Transit-Oriented Development Grant for $750,000; and a Federal Transit Administration (FTA) Bus Livability Grant for $1.4 million, among other grant monies. 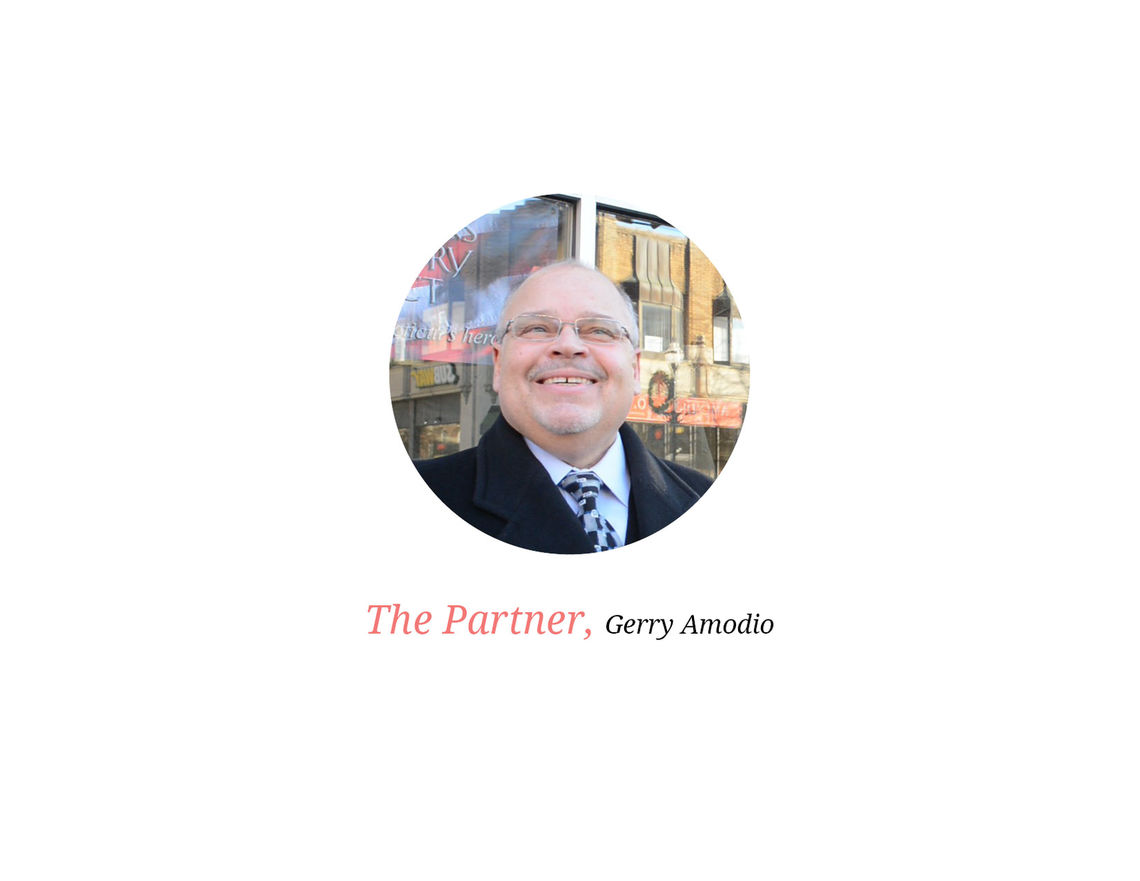 ​Commitment to the Process – The Plan was guided by a working group committed to downtown revitalization. Participants included area artists, local institutions, municipal officials, developers, the New Britain Downtown District, and the Polonia Business Association, which consists of Polish businesses and professionals throughout New England that is headquartered in New Britain. A Working Group member, Gerry Amodio, was born and raised in New Britain, and had a successful business in the City for 35 years. He remembers the New Britain of his childhood, “Growing up, we loved catching the bus, coming downtown for lunch and a movie, or just hanging out and shopping. But when the highway came through and the malls came in the 1970s, the downtown was gutted. For me, I had lost a friend.” As Executive Director of New Britain’s Downtown District, he is actively using the Plan to attract businesses and people to the City. “The Plan allows me to go out and entice people to move their business here, or come and move here. It shows that we know what we’re doing, what we want to get to, when we’re going to get there, and how were going to get there.” 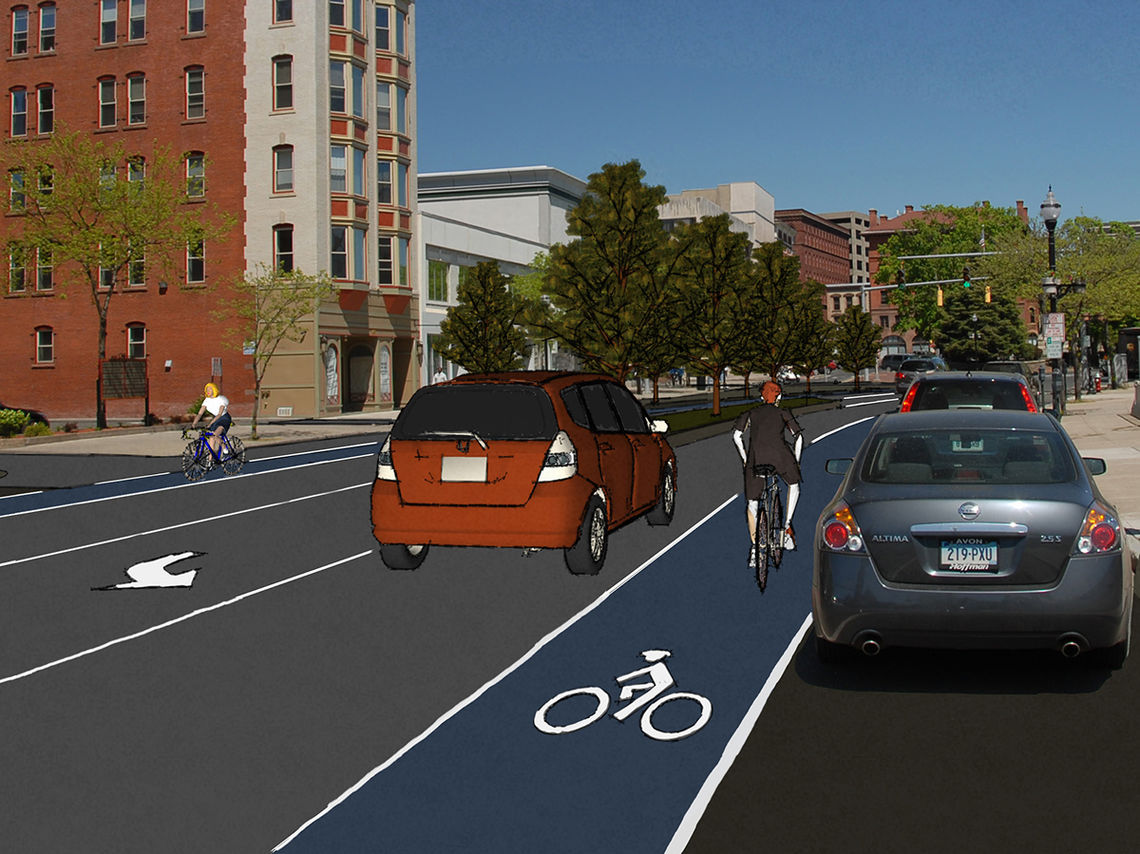 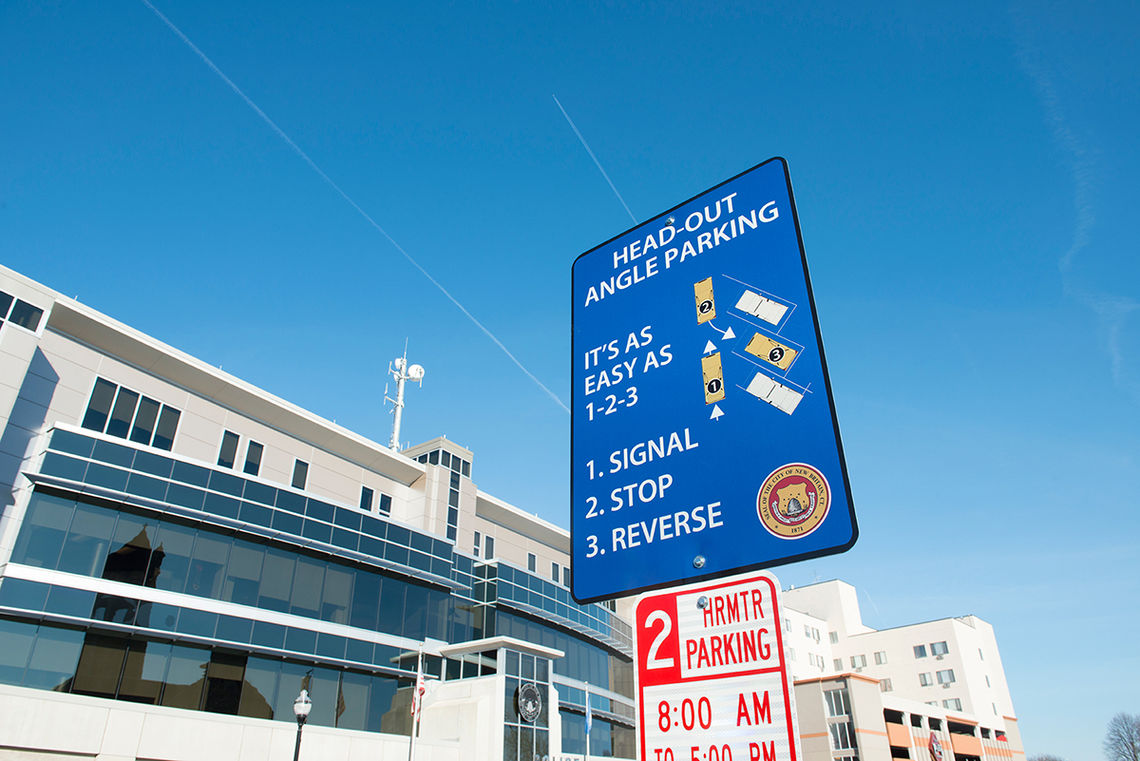 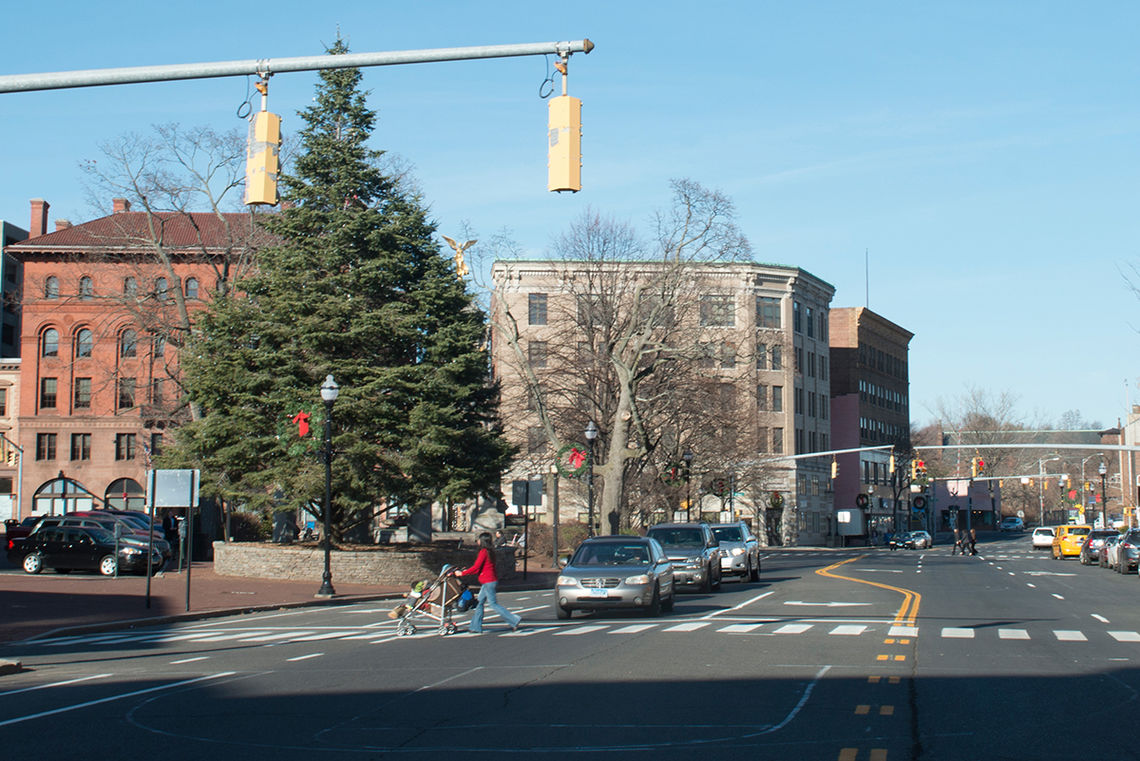 “From Day One, the people of New Britain have been interested in making the City better and helping shape the vision,” Urban’s Project Manager Erika Rush noted. “They were committed, and they’ve been supportive of every new idea we’ve proposed.”